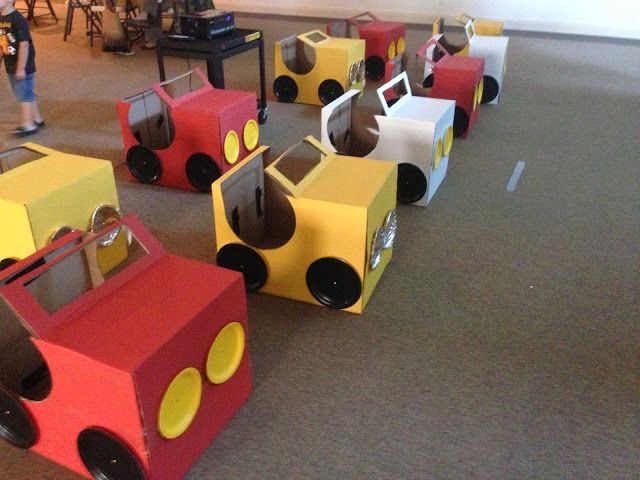 Friday, 8/1 at 3p.m. come and decorate your own cardboard car and pretend you are at a drive-in movie just like the old days. Stay to watch a cartoon and munch on some popcorn. Afterwards  take your car creation home and have a drive-in in your living room.   For 3 years and up.

Saturday 8/2 at 2p.m. the dinosaur people will bring fossils and talk about all things dinosaur.  There's a space limitation, so first come first in. For 4 and up.

It all starts with a vacuum cleaner.  One summer afternoon Flora Belle Buckman is drawn to witness what could only be described as a jet plane in the neighbors’ backyard, but turns out to be  a new powerful Ulysses 2000X vacuum cleaner gone berserk. When the vacuum cleaner sucks up one very hungry squirrel, Flora puts all the knowledge she’s gained from reading comic books to use and resuscitates the poor creature. But the last thing she expects to see is the newly revived squirrel lifting the vacuum cleaner over his head. Believing that the squirrel has gained superhero powers after the vacuum cleaner attack, Flora names him Ulysses, and the adventure begins.

Flora and Ulysses by Kate diCamillo is a wacky adventure that is heartwarming and laugh-out-loud funny, and every bit deserving of its 2014 Newbery Medal. One lovable heroine, an even more lovable squirrel, and a slightly annoying (yet somewhat lovable) boy make a winning team against malfeasance of all kinds in a fond tribute to superhero stories and comic books.

For grades  4 and up.
Posted by Anush No comments:


This story is about one fairy, two girls, some goblins, and their leader.  The names of the characters are Sky, Rachel and Kirsty, and Jack Frost.  The two girls are having a vacation on Rainspell Island.  The fairy got lost because Jack Frost cast a spell.  The two are trying to find a fairy named Sky, but they find a crab.  The crab leads the two girls to a tide pool, and dips its claw into the tide pool then takes it out, then goes away.  The two girls then try to find the fairy when they find the fairy it was in a bubble, in the tide pool.  Then there came some ice and froze the tide pool.  Since the fairy king and queen gave them packetful of magic they used it to un-freeze the ice.  Then they took out the fairy and popped the bubble.  At the end the fairy is found by the two girls.

Danielle the Daisy Fairy by Daisy Meadows
This story is about three girls, a fairy, a lot of goblins, and a magic petal. The names of the girls are Rachel, Kirsty, and Rebecca (they are best friends), the name of the fairy is Danielle, and the name of the goblins' leader is Jack Frost.  The goblins stole the petal from Fairyland.  The two girls and the fairy need to get it back from the goblin when they meet another girl and she helps them get the petal back.  When they get the petal back the fairy uses her wand to make a rope with daisies on it to tie a knot with all the goblins in it.  The petal was stuck on the goblin’s foot.  When the other goblins saw that one of the goblins was sitting down they got mad.  He was making something .The goblin that was sitting down was singing very noisily. I like this story because I like how the girls were making good choices.

LOOK FOR THESE AND MORE IN OUR PAPERBACK SECTIONS.  For readers in 2nd-4th grades.
Posted by Cecile No comments:

NEVER GIVE UP NED

Ned Mouse Breaks Away by Tim Wynn-Jones: A review by Lilian a 4th grade library patron:

This is a story about Ned the mouse, the warden, the keeper and Morty.  Ned is in jail and he is very desperate to get out.  He went to the cafeteria and got a spoon to dig himself out and ended up in the warden’s dessert.  The warden called for his guards and they took him back to his cell.  Ned became more anxious to get out of jail.

One day Ned’s friend Morty sent a note.  After that, Ned sent his different body parts to Morty’s place.  Then when Ned was sending his last body part he made a replica and a recording of himself to trick the warden.

I like this story, especially the part where Ned sent his body parts to Morty.

For readers in 2nd-4th grades.
Posted by Cecile No comments:

TURNING TWELVE IS NOT EASY

It all starts the summer Suzy is going to turn twelve. First, her mother leaves to take care of her sick grandmother. Then, her little brother Parker saves the life of their neighbor by calling 911 after she collapses at home. Now Parker is a neighborhood hero and he is letting it go to his head. To add to her woes, Suzy is starting to think of her friend Gilbert as a little more than a friend, and her best friend is chosen for a play while she is rejected. When her brother’s hero antics ruin her twelfth birthday, it is the last straw for Suzy.

After deciding that she has had enough of being Suzy Quinn, she tries to be like her favorite poet, the reclusive Emily Dickinson. But there is a chance that she might be taking it too far when she decides to only communicate with her friends via letters and refuses to do anything that Emily could not do.

This breezy verse novel by Eileen Spinelli is a perfect book for those leisurely summer afternoons, at home or on the beach.

For grades 4-6.
Posted by Anush No comments:

IS THIS OUR WORLD’S FUTURE?

The year is not certain but the story is set in the future where the world has become a very different one than ours. It is hot, very hot and has been that way as long as Devin can remember. He is one of the lucky ones as he and his grandfather live on a farm in a hidden idyllic oasis. While they had to work hard to keep up with the chores, life was good for them. When the grandfather suddenly dies, Devin must leave the safety of the hidden valley to find help to keep the farm going. What he finds instead is a nightmare of a society where children are left to their own devices and everyone has to lie, steal and cheat to survive. After a chance encounter with an older boy named Kit, the opportunity to escape the dark reality of the city to what sounds like paradise is offer him and he readily accepts.

Devin soon finds out that Paradise is not all that it was promised to be in Tania Unsworth’s, The One Safe Place a thrilling adventure story for readers in grades 5-8.
Posted by Cecile No comments:

THE POSSIBILITY OF CHANGING THE PAST

Thirteen-year-old Margaret O’Malley’s world is turned upside down when the corrupt Judge Biggs sentences her father to death for burning down a Victory Fuels building and killing a person trapped inside. Margaret knows that her father did not do it, and that his sentencing was in retaliation for uncovering a secret that Victory Fuels wanted to keep hidden at any cost. Desperate to save his life, Margaret decides to do the thing that she knows she shouldn’t – use the O’Malley gift to go back in time to change the events that made Lucas Biggs into the man who sentenced an innocent man to die. But Margaret will discover that changing the past means more than changing history, and that no one is beyond saving - from themselves or others.

Saving Lucas Biggs is a page-turner with lots of mystery, action, history, and a touch of science fiction, and will appeal to boys and girls in grades 5 and up.
Posted by Anush No comments: 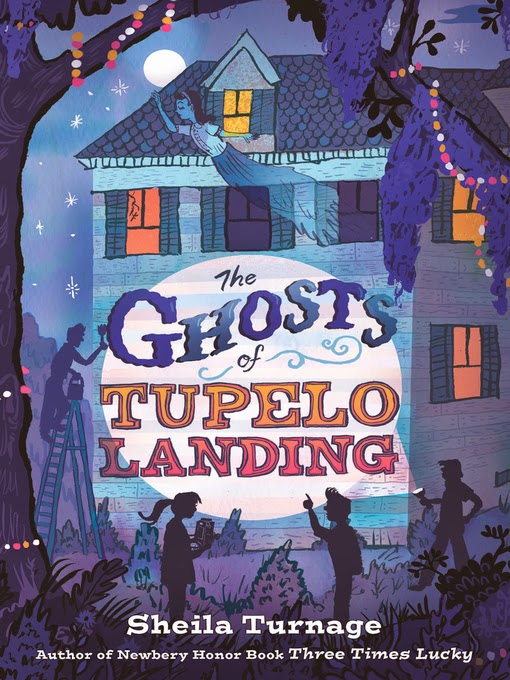 Mo, Dale, Miss Lana, The Colonel, and the whole wacky southern town of Tupelo Landing are back in this follow up to 2012 Newbery Honor book Three Times Lucky. Rising sixth graders, Mo and Dale, fresh off their last case with the Desperado Detective Agency, have a new mystery to solve and this one has a paranormal twist. When Mo’s guardian, Miss Lana, accidently buys an inn that is home to a ghostly presence Mo and Dale take it upon themselves to uncover the mystery behind the haunting and hopefully interview the ghost for their history project.

Ghost hunting isn’t as easy as Mo and Dale hope it will be and they soon discover that the ghost isn’t the only mystery at the inn. Long-buried pasts are uncovered and secrets are revealed as Mo and Dale investigate the inn’s tragic history. Who is the ghost and what is she trying to tell them? What’s the connection between the new kid in town and the mysterious happenings? The Ghosts of Tupelo Landing by Sheila Turnage is a fun and slightly spooky read.

For grades 4 and up
Posted by Erin No comments:

GIRLS ARE SO MEAN SOMETIMES

It's summer vacation on Darcy Lane, and Julia is looking forward to a season of swimming, sitting around with her best friend Taylor, and thinking about the neighbor boy Peter. Lo and behold, the new neighbors move in with a girl Julia's age named Alyssa, and that changes everything. For some reason, Alyssa is rude to Julia from day one, steals best friend Taylor (is she such a good friend after all?), and basically makes Julia's life miserable - until the day of the great battle of Russia!

THE BATTLE OF DARCY LANE by Tara Altebrando is your typical, tween angst novel, but is original enough to keep you reading to the very end. Questions like "will Peter and Julia become more than friends?" and "who is the mystery prank caller" intermingle throughout the story, with everything tied up in a nice neat bow at the very end.

JUNE 2014
Posted by Unknown No comments: 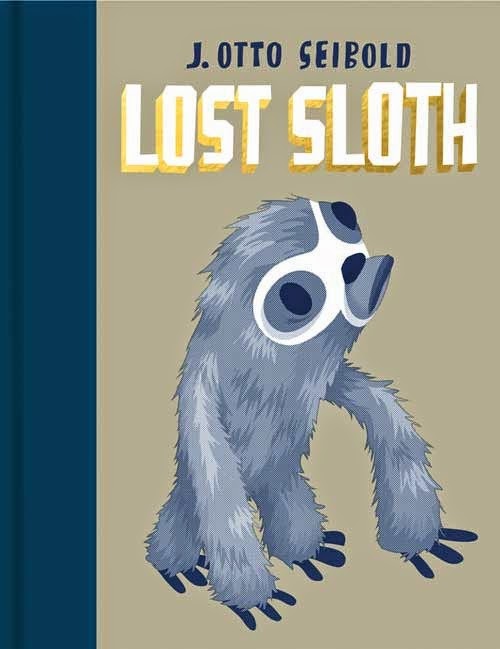 What happens when a sloth needs to hurry? Sloth receives a phone call informing him that he’s won a shopping spree at a store downtown. While he’s not exactly sure what a “spree” is, Sloth is very excited and knows he will have to hurry to make it to the store to claim his prize. The problem, however, is that sloths are not known for their speed. He tries various methods of getting to the store- zip-lining down the clothesline, riding an ice cream truck, and even hang gliding. Will sloth make it to the store in time? Will he have enough energy to race through the store for his shopping spree or will he need to take a nap?

Lost Sloth by J. Otto Seibold really showcases Seibold’s signature offbeat illustration style and storytelling. This is a great choice for storytimes and listeners won’t be able to help chiming in with the recurring phrase “Hurry, Sloth” on each page.

For preschool and older.
Posted by Erin No comments: 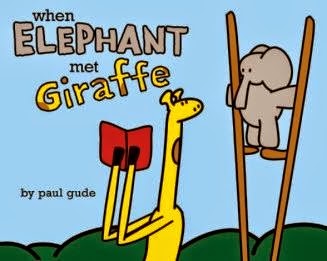 When Elephant visits the water hole, he is excited to hang out and have a conversation with Giraffe.  But Giraffe never responds. Uncertain of his behavior, Elephant decides to read a book about giraffes.  As a result of his patience and curiosity, Elephant comes to understand why Giraffe doesn't say a word.

In a series of episodes, Paul Gude's lovely picture book vibrantly illustrates how friends can still be friends even though there may be distinct differences between them.

For all ages.
Posted by Vivian No comments: