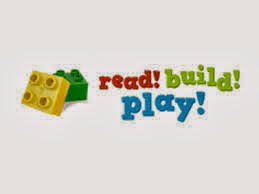 Until Oct. 15, 2013 ALSC and LEGO DUPLO invite the public to visit  http://apps.facebook.com/duplo-prod/, enter their name, state and zip code to vote for their public library.

In recognition of all of the meaningful programs, reading lists and activities that are carried out across the country, LEGO DUPLO will grant $5,000 to the public libraries in the neighborhood with the most entries.  If there are multiple public libraries in the winning zip code the award money will be divided equally amongst them. Official rules are included.  To learn more about the partnership please visit http://readbuildplay.com.
Posted by Cecile No comments:

Next Saturday, October 5, 2013, the Children's Room will participate in the Global Cardboard Challenge.  We want as many children from the community as possible to come and fire up their imagination.  Build whatever you'd like or just have plain old fun with cardboard.

Parking is free for 3 hours with validation in the parking structure across the street on Harvard.

Have you ever wished for a wishing machine?  Something to grant you your heart's desire?  Benny's friend Ray draws him a wish machine on a piece of paper and encourages him to start making wishes and they'll all come true.  Benny looks at Ray like he's bonkers and throws the drawing to the side.  That is, until Benny's wishes start coming true - sort of.  Like when he wishes for ear plugs at night and ends up with head phones.  Is Ray playing a trick on Benny or is there a bigger surprise in store?

Ghosts, Cryptids, Kidnappings, and more can be found in this thrilling collection of short stories called Thriller, edited by Jon Scieszka, the man who brought you The True Story of the Three Little Pigs and Time Warp Trio.  Don't let the series title "Guys Read" fool you, these stories are great for all kids, guy or gal, in grades 5 and up.
Posted by Lessa No comments:

After the global response to “Caine’s Arcade,” we were inspired to launch a non-profit called the Imagination Foundation to foster creativity and entrepreneurship in kids like Caine everywhere. Help bring this movement of creative play to kids in your community via our annual “Global Cardboard Challenge”: www.cardboardchallenge.comand learn more about our Imagination Foundation non-profit:www.imagination.org
Posted by Cecile No comments:

A secret government agency.
Two kids on the run.
And one ruthless killer-with a fuzzy cotton tail.

The professor in their apartment building is missing and two men in suits and dark glasses are sure desperate to find him.  Jeremy thought he had it made, a project all ready courtesy of the professor since he hadn't started on his at all and it's due - SOON!  It turns out that the fluffy rabbit thing is a jackalope, a mythical creature,  hidden in his hamper, who loves to drink alcohol.  Only Agatha, his other neighbor, classmate and the professor's former assistant also a science genius, can help him out of this jam.

Project  Jackalope by Emily Ecton has all the elements of a great spy action adventure caper.

For readers in grades 4th -6th.
Posted by Cecile No comments:

12 IS A MAGIC NUMBER

The year that children turn 12, their minds are capable of almost anything.  Learning a new language, taking on advanced mathematics, and moving things with their minds are simple tasks for the trained tween.  At Myers Holt Academy, a few select children are recruited to harness and train what researchers call "The Ability" - where anything is possible.  One of this year's students is Christopher Lane.  A boy with a hard home life and not many prospects, Chris has the opportunity of a lifetime, but at a price.  The students of Myers Holt Academy will be asked to put their lives at risk to save the Prime Minister of the United Kingdom from the deadliest use of The Ability, something most people only hears stories about - The Inferno.

Fans of the Harry Potter and Percy Jackson series will appreciate taking a normal, misunderstood kid and placing him in a setting where the world is at his fingertips.  The Ability by M.M. Vaughn is for students in Grades 5 and up.
Posted by Lessa No comments:

In Capture the Flag, the flag is the historic “Star Spangled Banner” flag, and it is captured from the modern Smithsonian after a re-dedication ceremony by person or persons unknown.  Seventh graders Anna, Henry, and Jose were at the ceremony last night, because each of their parents was involved in the event.  They really didn’t meet until this morning, trapped at the airport by a record breaking blizzard and fighting over electrical outlets to save batteries on their various devices.  They hear the breaking news that the flag is missing, and a little later hear that Jose’s mother is a prime suspect.

The rest of the story takes place in the airport, during the blizzard. Budding journalist Anna; game freak Henry; and Harry Potter fanatic Jose pool their talents and differences to discover clues that suggest the thief/thieves may be trapped in the airport, too.  Along the way to solving the crime and freeing Jose’s mom, the trio is harassed by a presidential candidate, spied on by a suspicious serpent-tattooed food manager, chased at knife-point through the baggage area, and corralled by airport security.

In true National Treasure tradition, there is humor, danger, and a secret society or two to keep the plot twisting and the pages turning.  It isn’t until the planes are ready to roll that author Kate Messner finally lets her junior detectives re-capture the flag. Young readers, their parents and maybe even a film producer or two will like this book.

For readers in 4-7grades.
Posted by Cecile No comments:

Lee Jones and Joan Lee are opposites in name and personality, but they are also BFFs.  They do everything together - even without knowing.  The night before their 8th grade trip, their parents both tell them they're getting divorced - right after dinner and just before dessert.  After this horrible news, the next morning, they discover that instead of going to California Dreaming, the BEST amusement park ever, their 8th grade trip will take place at a Fort.  The fort sounds like a horrible field trip until they fall asleep in the fort's lighthouse and wake up in past San Francisco - 1863 to be exact.  On their way to trying to figure out how they got to 1863 and how they're going to get home (or if they even want to live in a world with divorced parents and separate high schools), they befriend another time traveler, Samuel Clemens, who teaches them a thing or two about getting around the Wild West.

Lewis Buzbee's middle-grade novel Bridge of Time is perfect for 6th through 8th graders looking for adventure and excitement with a little SciFi and Historical Fiction thrown in.
Posted by Lessa No comments:

Sam and Morgan are best friends. Well, they used to be. Now, Morgan is on the football team and Sam is captain of the school math club.  And, in exactly 33 minutes, Morgan is going to kick Sam’s butt.

In those agonizing 33 minutes, Sam is going figure out exactly what went wrong. How did they go from being best buds since forever to rivals in what is sure to be the school’s most anticipated recess fight in recent memory?

33 Minutes by Todd Hasak-Lowy perfectly captures the hilarious, yet heart-breaking ups and downs of middle school and the different paths that friendships can take. Highly recommended for fans of Diary of a Wimpy Kid!

Grades 5 and up
Posted by Erin No comments:

A review from Mr. B of the Grandview Branch:

With the help of his best friends, Mike and Other Mike, twelve year old Lenny Norbeck wins the Armchair Announcer contest sponsored by the Philadelphia Phillies.  In the broadcast booth, before the game, Len meets nineteen year old rookie starter R. J. Weathers, a fun loving talent making his debut that night. In the first inning, R. J. has a rocky first few pitches, then drops dead on the mound.  While everyone else is saying things like “tragic heart attack,” Len and the Mikes are saying “murder.”  Who would murder a nice-guy rookie? Why? How?  Only Len and the Mikes seem to care at first.  They are soon joined by an unexpected ally: a baseball savvy girl.

Josh Berk opens Strike Three You’re Dead with the young detectives being shot at by the murderer, then tells the entire story as a flashback.  Not until the story works its way back around to the “present” at the end of the book do we find out who’s shooting at them.  This is a great baseball yarn; an intense murder mystery; and a humorous buddy tale; three good books in one.

An odd cast of characters takes the stage in this book, including a Black Bear named Walden (he's very philosophical), a gruff and tough Badger named Banderdock, and a mean, scrappy cat called McTavish the Monster.  These are the animals that expert boy scout Max "the wolf" encounters when he awakens from a strange sleep and cannot remember anything that happened.  Max and his friends quickly become THE HUNTED as they simultaneously run for their lives while trying to figure out who Max is and how he got to this strange world.  Max's adventures are woven with other side stories that all tie together in a nice pretty bow, but take some quirky turns getting there.  DOWN THE MYSTERLY RIVER by Bill Willingham is an exciting book for grades 5 and up.

May 2013
Posted by Unknown No comments: 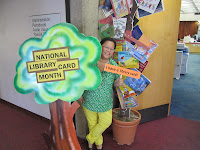 WITH A PICTURE OF YOURSELF AND YOUR CARD! September is National Library Card Month so come and sign up for your very own library card if you don't already have one.

BOOK CLUB FOR THAT SPECIAL AGE 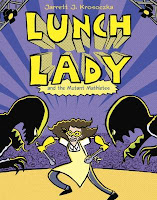 CHAPTER BOOK CHAT, our library book club for kids, will begin its fall session this Wednesday, September 4, at 4p.m. at Casa Verdugo.  All 3rd, 4th and anyone ready for beginning chapter books are welcome to join us for the reading of The Lunch Lady and the Mutant Mathletes.  For a list of upcoming dates pick up a flyer or check our online calendar. 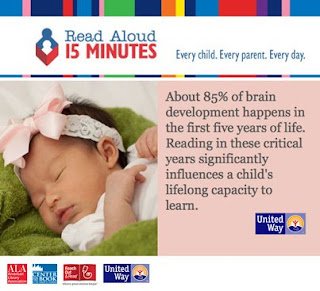