LET'S PARTY WITH THE WIMPY KID! 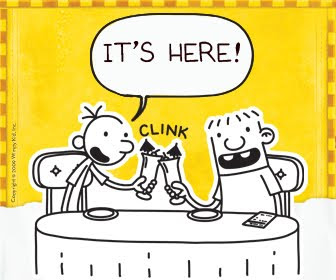 COME TO THE DIARY OF A WIMPY KID PARTY.
TUESDAY, JUNE 2ND AT 2PM.

PLAY PARTY GAMES, MAKE SOME CRAFTS AND TEST YOUR DWK TRIVIA.
HANG OUT WITH OTHER DWK FANS FOR SOME FUN.

Pick up your summer reading logs at any of the Glendale Library Arts and Culture branch beginning tomorrow, Thursday, May 28.

This Saturday, May 30, at 2 p.m. Dan Crow will have you singing along with him in the Children's Room.  It's musical fun for the whole family.

A VIOLIN FOR ELVA 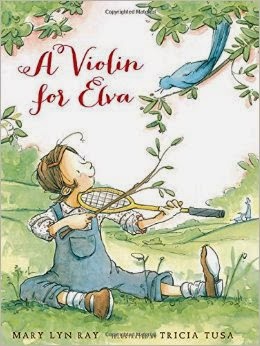 When Elva was a young girl, she heard beautiful music. Unfortunately, her parents couldn't hear what she had heard, so they are quick to deny her request for a violin.  Although downhearted, this doesn't stop Elva from listening to the music that played in her heart and soul.  As she gets older, she continues to listen to music on the radio to fill that special something that is missing her life. Elva finally decides that it's never too late to enjoy music, so she gives herself the gift that will last her a lifetime.

A lighthearted story about a young girl who grows into adulthood, and never lets go of something that meant most to her.  A story to warm the heart. A Violin for Elva by Mary Lyn Ray is for adults and children, K-3rd grade, to enjoy together.
Posted by Vivian No comments:

WHAT IF YOU SUDDENLY HAD THE POWER TO DO THE IMPOSSIBLE?

Right from the start you need to know that this is a very unusual tale. It has all the elements of a family story, two kids living with their father on a farm in Montana. There is a missing mom who has moved to New York to pursue her career as a writer but that is not what even comes close to making this a very odd book. What happened that very stormy day in Fiona and Fenton’s yard was, as they say, “a big game changer.” When that bolt of lightning hit the maple tree in the front yard and left behind what looked like a ball of lightning everything changed.  The twins managed to capture it and accidentally discovered that it was capable of bringing dead things back to life.

Starting small they experimented with dead bugs, small rodents, a favorite dog and ultimately their grandfather who had been killed in a car accident. While the ball brought the dead back to life, no one was quite the same. The maple tree suddenly started bearing apples and the dog was not so friendly. Though to be honest does anyone really want to be friendly with a skeleton dog? Even their grandpa Wade was a different man, much nicer than the cranky guy they remembered. But as we find out in Evan Kuhlman’s book, Great Ball of Light, bringing the dead back can get complicated particularly when they stick around. Not always a dark tale of death and zombies, this one has some very funny and warm moments. 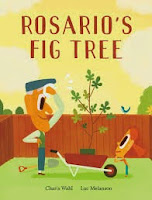 Rosario is a gardening magician according to his young neighbor next door.  Rosario knows exactly when to plant the vegetable seeds and she loves helping Rosario care for the garden. One day, Rosario decides to dig a hole for a potted fig tree he recently bought.  He takes the tree out of the pot and places it in the ground and watches it grow.  He gives figs to his friends and neighbors but when winter rolls around his young neighbor could not understand why Rosario would bury the tree.

In Rosario’s Fig Tree, author Charis Wahl has written a simple story about the young neighbors' experience with gardening.


For ages K-2nd grade
Posted by Unknown No comments:

In Sarah Weeks' new novel, instead of a cat, she writes about a dog plus the usual friendship between a girl and a boy set in a small town with seemingly random characters and unrelated stories.

Has he found a wife finally?  Who could it be? She desperately wants her father to be happy and has been making the same wish on her birthday for as long as she could remember but is her dream about to burst when she hears that her awful math teacher is also getting married?!  Could her father be marrying her?!!

Honey is a magical tale of loss, love and the search for a happy ending for everyone.  A solid and lovely story as good as Pie that's perfect for a summer read.

THE MYSTERY OF THE MOSAIC 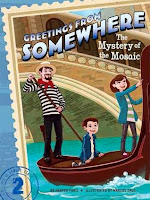 In trouble? Ask Ethan and Ella for help. These twins have a keen eye for clues. When their mother, Josephine Brair, was to start her new job as a travel writer, the entire family had to travel with her.  Their father, Andrew Brair, a history professor was to homeschool his twins.  While exploring Venice, Italy, the twins receive a clue from their grandfather that will take them on an adventure searching for a missing mosaic and a stolen gondola.

Read the story by Harper Paris to find out if the characters ever uncover the mysteries. The Mystery of the Mosaic is part of the Greetings from Somewhere series. This is a very short chapter book that covers different genres: mystery and adventure.  The illustrations are wonderfully presented in black and white drawing.  The story also covers interesting facts about Italy.

For grades 1-3
Posted by Unknown No comments: 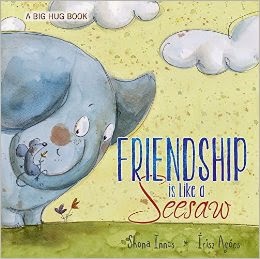 An important book to share before a child starts school or as friends struggle with hurt feelings.
Posted by Vivian No comments:

THE ANIMALS BEHIND THE STORIES 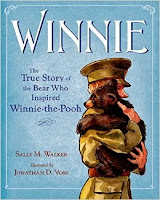 Winnie-the-Pooh and, much more recently, Ivan the gorilla have become beloved children's book characters. But both characters were also based on real-life animals, and the books Winnie: The True Story of the Bear Who Inspired Winnie-the-Pooh by Sally M. Walker and Ivan: the Remarkable True Story of the Shopping Mall Gorilla by Katherine Applegate tell the little-known stories behind the celebrated ones.

The story of Winnie (originally named Winnipeg) begins with an army veterinarian in Canada who finds her at a train station and buys him from a man for $20. The bear shadows the vet as he works in army camps, endearing herself to all the soldiers, but after war breaks out, Winnie must begin her life at the London Zoo. It is there where a young boy named Christopher Robin and his author father meet Winnie, and so begins idea for one of the most beloved children's book characters of all time. Walker's story is engaging and gently told, and historic photographs of the real Winnie and her life in the army on the endpapers supplement the sweetly charming watercolor illustrations by Jonathan D. Voss throughout the story. 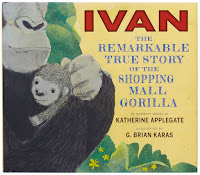 Though the story of Ivan the gorilla's time spent as a spectacle in a shopping-mall display is much newer to young readers, it has also captured their imaginations in a big way, and the children's novel The One and Only Ivan won Applegate the Newbery Award in 2013. Now she has turned to the non-fiction picture book to tell Ivan's story for children too young for the award-winning novel and provide extra background for those who loved it and want to know more. The warm and delightful artwork by G. Brian Karas pairs nicely with Applegate's simple but evocative words, and will pull young readers as they learn all about the esteemed gorilla's life from wild to shopping mall to zoo.

Both animal biographies are ideal for first graders and up.
Posted by Meghan No comments: 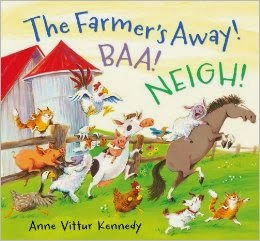 In her colored pencil and acrylic ink, Anne Vittur Kennedy masterfully paints rollicking scenes.  One can't miss the sheer joy the animals feel.  Although the text is sparse and colored with animals sounds, the story conveys joy, and the illustrations quickly fill this book with the kind of fun readers will want to enjoy over and over again and find new things to laugh about.
Posted by Vivian No comments:

CHRONICAL OF A SIXTH GRADE YEAR

In The Meaning of Maggie, author Megan Jean Sovern introduces a remarkable character, Magnolia Jane Mayfield. The year is 1988 and Magnolia or Maggie as she prefers to be called is getting ready for a big change in her life—sixth grade and middle school. For some kids that starting the new school year, particularly middle school is something to be dreaded but not for Maggie. She is one of those kids who loves school and is anxious for it to start again.

This year she has decided to start writing her memoir because as an aspiring president of the United States it will come in handy. It is here that Maggie shares her story with the reader and lets us know about her love of school, reading, the big changes in her family, dad gets sick and mom goes back to work, and their love of music. Her observations are wide ranging from her dad’s multiple sclerosis, butterscotch to the unbreakable Law of Mom are sometimes serious but always entertaining. Follow along as this unforgettable character negotiates her way through a challenging year.

For readers in grades 4-7 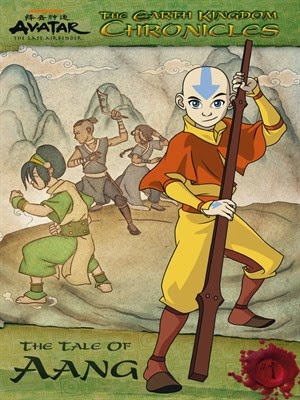 Earth, Fire, Water, and Air are the four nations that live in Aang's world.  When Aang was twelve years old, the leader of the Fire Nation became power hungry and wanted to take control of all four nations.  Aang was the last known survivor of the Air Nation, so he had to encapsulate himself and his trusted pet Apa in ice in order to survive.  For one hundred years, no one knew he had survived until two people form the Water Nation discovered his ice tomb and rescued him.  Now that he's free, it is up to him to learn the ancient fighting techniques from all four nations.  Who will teach him?

Michael Dante DiMartino and Bryan Konietzko are the creators of this incredibly exciting adventure filled with humor, suspense, love, and friendship.  Readers in the 4th grade and up can now enjoy The Earth Kingdom Chronicles as an eBook in OverDrive.  Other books in the Avatar: the Last Airbender series are also available to checkout or reserve a copy today.
Posted by Vivian No comments: