It’s always a good idea to be nice.  Here’s why: Sometimes there are consequences for our bad behavior.  Here’s a story about a boy named Glen who loves to complain and lie.  One day Glen strays away from his classmates on a class trip in the woods. He encounters a tiny creature who helps him find his way back to his classmates.  But Glen does what he does best…complains. The tiny creature warns him that if he continues with his awful behavior, he will turn into something more useful. Of course Glen ignores the warning. After he returns to his class he realizes something has changed. He refrains from his usual meanness until he comes across a stray dog and kicks it when he thinks no one’s looking, which triggers the final change.

Read A Dog's Breakfast and find out what happened to mean Glen. This is a quick read by Annie Graves with black and white illustrations by Glenn McElhinney.

For grades 3+
Posted by Unknown No comments:

Ranger always knew he was destined to be a search-and-rescue dog. He’s had all the proper training, and with his powerful nose he’s never failed to find his mark. Sure the spirited golden retriever has a tendency to be distracted by squirrels, but really, what dog could possibly resist the allure of a bushy tail racing past?

It’s during one of these exuberant squirrel chases that Ranger uncovers a mysterious metal box in his backyard and suddenly finds himself traveling back in time to Independence, Missouri, circa 1850. Though Ranger longs to be reunited with his own family in his own time, it’s soon clear to him that he’s been sent to watch over the Abbott family as they embark on the historic Oregon Trail and that he won’t return home until this mission is complete.

Fans of Mary Pope Osborne’s The Magic Treehouse Series will enjoy this well-researched historical (with a hint of magic) tale. Ranger in Time: Rescue on the Oregon Trail by Kate Messner is the first of a series, followed by Danger in Ancient Rome (June 2015) and Long Road to Freedom (December 2015). The book includes an author’s note with historical background and references.

For grades 2-4.
Posted by Sherry No comments: 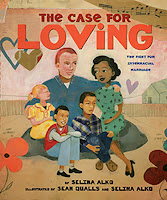 ...So begins The Case for Loving, a moving nonfiction picture book centered on the Loving v. Virginia supreme court case and the fight for interracial marriage. Only the year is 1958 and Richard Loving, a white man, and Mildred Jeter, part black and part Cherokee, live in the state of Virginia, where it was against the law for people of different races to marry. Though they must relocate to Washington, DC, in order to live together and raise their family, they keep fighting a lengthy legal battle to make sure families like theirs may be allowed to live in all fifty states by 1967.

Accompanied by the gentle yet evocotive paint-and-collage art by Sean Qualls and the book's author Selina Alko, Alko's text is powerful in its simplicity. It might be hard for young readers to imagine a time in America where interracial marriage could land people in jail, and this nonfiction picture book manages to deftly examine the historical injustice through the experience of one family in a straightforward, age-appropriate, and relatably poignant way.

An author's note, words about the art, sources, and suggestions for further reading are included so that parents or teachers might expand on the discussion, but this story of love, family, and standing up for what's right will resonate with young readers in its own right.

Recommend for 3rd grade and up.

Posted by Meghan No comments: 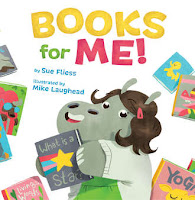 Young Hippo is very excited to visit the library with her father.  She explores the different subject books in hopes of finding great books for herself.  As she discovers the different sections, her imagination takes her into each story.

Books for Me! by Sue Fliess, gives children an understanding of the different kinds of books that are available at the library with many references to classic children’s literature.  Illustrator, Mike Laughead's  wonderful artwork brings the book titles to life in each page.  The amazing illustrations and rhyming words in this book emphasize the joy of reading and libraries.  A must-read for all children!
Posted by Kristine No comments:

WHEN YOU NEED A FRIEND 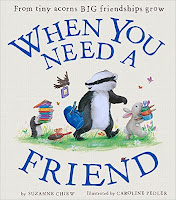 Watch out the storm is coming. What should we do? Read When You Need a Friend by Suzanne Chiew.

Rabbit, Hedgehog, Bird and Mouse hurried straight to Badger’s house.  Worried that the storm would destroy their homes, they turned to the Badger for help.  Badger, a true friend, did not let his friends down; he helped each one sturdy up their home.  When it was time for him to go he was caught in the storm, so Rabbit asked Badger to stay with them until morning. When they woke up the next morning they found the old oak tree, where Badger lived, destroyed.  So, the four friends helped Badger rebuild his home.

This is a heart-warming story about friendship, with bright and colorful illustrations by Caroline Pedler.

For Ages 4 -6
Posted by Unknown No comments: 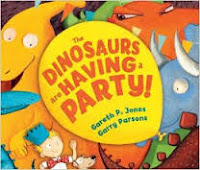 Imagine receiving an invitation to a dinosaur's party. How exciting, right? A young boy attends a dinosaur party and for the most part he has a great time, with the exception of one dinosaur who tries to grill him and a T-Rex who chases him. Luckily he makes it home safely only to find out he accidentally took the wrong party bag.

The Dinosaurs Are Having a Party by Gareth P. Jones, illustrations by Garry Parsons, is a wonderfully written picture book.  With beautiful, bright illustrations and rhyming story, this would be a great read aloud for a preschool audience.
Posted by Kristine No comments:

THE FANCIEST CAR IN THE UNIVERSE 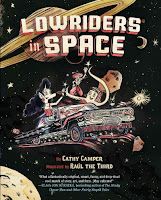 LOWRIDERS IN SPACE by Cathy Camper is a unique graphic novel because the illustrator Raul the Third did all the art work with three colors of ball point pen! He does a fantastic job of helping to tell the story of Lupe Impala, a female mechanic, El Chavo Flapjack, a car detailing octopus, and Elirio Malario, a Zoot Suit wearing mosquito who does amazing car paint jobs! Why do they do all of this? Because they love cars. All they need to do now is win the Universal Car Competition so they can open their very own garage instead of working for "el jefe". Their lowrider turns out being out of this world! Many car lovers and those that appreciate great drawing will be drawn to this book, but it's especially good for 4th - 8th grades.
Posted by Unknown No comments: 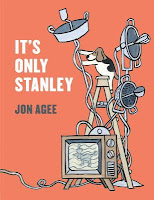 “The Wimbledons were sleeping. It was very, very late, when Wilma heard a spooky sound, which made her sit up straight.”


If you’ve ever had a dog (or lived next door to one) you might not be surprised to hear late-night barking. For the sleeping Wimbledon family, however, their pet’s soulful howling is only the first of a series of increasingly bizarre circumstances that continue to disrupt their sleep. As clanking, blubbing, buzzing, and splashy noises echo through the night, the Wimbledon children file into their parents’ bedroom one by one. Little Wendy is followed by Willie, who is even later followed by Wanda and Wylie in turn.
As the book title suggests, Mr. Wimbledon dismisses his family’s escalating concerns after each investigation with a blithe “It’s only Stanley…” Meanwhile, Stanley is revealed to be a dog of many talents as he switches from allegedly “fixing the oil tank” to “making catfish stew.” Walter’s interpretations predictably miss the mark. As for Stanley’s true intent, let’s say it rhymes with “KABOOM.”
In It’s Only Stanley, Jon Agee has created a humorous, noisy picture book mystery. With even rhythm and rhyming, it’s a lovely book to share with a group or one-on-one. Best appreciated by preschoolers and older.

Posted by Sherry No comments: 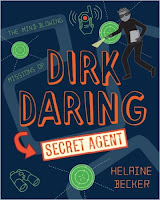 Darren Dirkowitz, an adventurous and spy-obsessed fifth grader, lives a double life as Dirk Daring Secret Agent. His opportunity to take on a real mission comes when his stepbrother gets a hold of his top-secret spy journal. For fear of it getting leaked to the students of Preston Middle School, Darren and his best friend “T-bone” set out to complete some spy work at the school for his evil brother. However, an unexpected turn of events occurs as Darren gets further into his mission.


Read to find out what happens when friendships are tested and secrets are revealed in this amusing narrative filled with appealing illustrations.  Dirk Daring, Secret Agent by Helaine Becker is a perfect read for students who enjoy spy adventures. This book is for grades 4-6.
Posted by Kristine No comments:

OUR MISSION:  TO TURN WICKED DELINQUENTS AND FORMER VILLAINS INTO FUTURE HEROES.

Can "baddies" really be reformed?
All is not as it seems at Fairy Tale Reform School just outside of Enchantasia where the teachers are former fairy tale villains and the new student, Gillian, knows something strange is happening.
Flunked is new a fast-paced fantasy adventure for 4th-6th grader readers by Jen Calonita.


Posted by Cecile No comments:

Your family was on vacation?
You just got your log last week?
You forgot all about your summer reading log?
Well, bring it in if you still have it.  You worked hard reading those eight books so come and turn it in so you can get your book prize and a few other goodies at the Central library.
We're open seven days a week.
Posted by Cecile No comments:

TWO GIRLS AND THE MYSTERY OF THE PREGNANT DOG

In The Disappearance at Hangman's Bluff, J.E. Thompson writes another suspenseful mystery set on the Reward Planation in South Carolina. Abbey and Bee are back and this time they can't figure out why someone would steal Yemassee, their neighbor, the judge's pregnant dog.  While searching for Yemassee they encounter the mean girl from school and her family, who blames Abbey's dad, who had just come out of a long coma, for their recent misfortunes and vows revenge.


Set against the backdrop of a summer storm, this complex mystery adventure weaves in the history of slavery, black and white relationships and human compassion. Check out the other book as well, The Girl From Felony Bay.
For readers in 6th - 8th grades.

GOBLINS, GHOULS, ROYALTY AND CHEFS OF THE UINDERWORLD

Yup, apparently there are chefs in the underworld, in the form of vampires that like to bake. At least that is what Andi Watson implies in her graphic novel called PRINCESS DECOMPOSIA AND COUNT SPATULA. Decomposia, or Dee for short, is a little overwhelmed with the duties of her father the king. He is much too unwell to handle his normal duties, which might be because all he eats are kippers and carrot water! You will have to read it for yourself and tell me what you think because I think this book is just SILLY!!! Definitely for 4th-8th grades.


JUNE 2015
Posted by Unknown No comments: