THE SUMMER OF MILLICENT, STANFORD AND EMILY 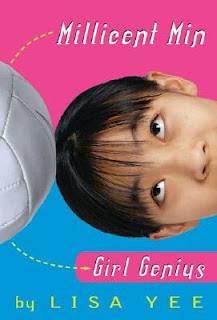 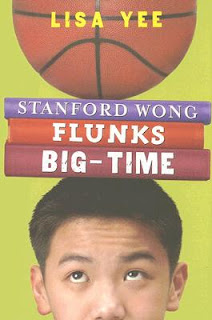 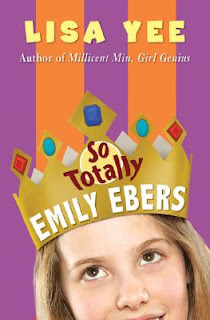 This trilogy is set in the summer right before the start of middle school. Three kids come together in friendship, well for two of them a mutual understanding. Millicent, Girl Genius, is enlisted to tutor Stanford Wong, (who) Flunks Big Time, in English for the summer. Along comes So Totally, Emily Ebers, who just moved into the area and befriends Millicent.

Millicent is socially challenged and has never had a close friend before. Because everyone thinks she's a freak, she will do almost anything to keep Emily from finding out that she's so brilliant that she is homeschooled. Stanford can't stand Millicent but needs her to pass the class so he can play basketball next season. But, he can't let Emily, whom he thinks is absolutely adorable, know that he's being tutored! Or any of his friends for that matter. Emily on the other hand substitutes her father's absence in the wake of her parents' divorce by charging everything on the emergency credit card and buying friendships. She seriously has a crush on Stanford and doesn't get why Millicent is so hard on him.

Everyone has a secret that they want to hide, but not for long. Each have to deal with their perceived failures and shortcomings in their own way. A fantastic trio of companion books from each person's point of view. Start with Millicent Min, Girl Genius by Lisa Yee.
For mature readers in 6th - 8th grades.
Posted by Cecile No comments:

Since Mary Ellen is not in the mood to do much reading lately, her grandfather suggests that instead they should try to find a bee tree and taste it's sweet honey. To do anything but reading, the curious girl agrees and they go buzzing around the town following the bees in search of the bee tree.
More and more people follow them from the neighborhood as they swarm through it. The grandfather patiently tries to instill the love of reading back into his granddaughter by spooning honey in a book and asking her to taste it's sweetness.
PATRICIA POLACCO has definitely written another great and sweet book to be read by everyone.

For pre-school to 2nd grade.

FRIENDS ARE NOT GOOD GUINEA PIGS 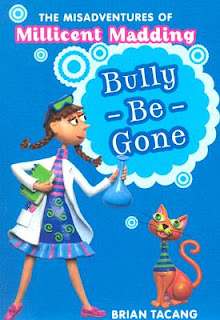 In BULLY-BE-GONE: THE MISADVENTURES OF MILLICENT MADDING by Brian Tacang, Millicent Madding is always looking for ways to improve the lives of those around her. Being somewhat of a scientist, Millicent hangs out with many intelligent individuals - Toneisha the poet, Pollock Wong, the artist, and Juanita Alonso, a violinist. They all have a little trouble with the local bullies, and Millicent devises a concoction to scare them off. Meanwhile, the crazy Uncle who takes care of Millicent since her parents' disappearance, has many surprises and discoveries of his own. A lot is going on in this book, but it isn't hard to keep up with all the entertaining antics. Great for 3rd - 6th grades.
Posted by Lyda No comments: 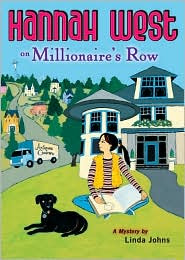 Look for this title in our paperback section - fourth in the series.
Another plucky sleuth who is "technically homeless" since she and her mother had to sell their house but are now house sitting for other people's homes. This time they are house sitting for a couple who owns a home on historic Millionaire's Row and five cats. All their former clients and friends come together for this installment of Hannah West, where it seems like there really isn't a crime but more of a mysterious moving of the neighboring houses' things. Weird things happen, like a toilet seat cover is closed, a toaster is moved to a different place, a bowl of fruit is placed where there wasn't one before. Is it a Feng Shui ghost? The neighborhood watch doesn't have a clue and the police aren't taking it seriously, but Hannah West, has her keen eye on the problem and is determined to solve it.
For readers in grades 4th and older.
Posted by Cecile No comments:

IRON THUNDER: THE BATTLE BETWEEN THE MONITOR AND THE MERRIMAC

Tom knows more information about Captain John Ericson’s vessel than any other teen (or Confederate Spy). When his father was killed in a battle against Confederate Soldiers, Tom set out to find work with the Union Navy. As an assistant to the Captain of the U.S.S. Monitor, Tom is fascinated by his work but is also fearful of the spies in the surrounding dock.
Exciting! Informative! Engaging! Avi’s Iron Thunder will beg readers to keep on reading until the very last page.
Best for 4th grade and up.
Posted by Vivian No comments: 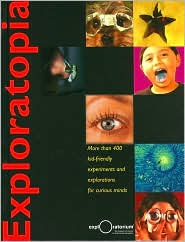 Summer is here and instead of doing the usual stuff you need to get this book and start experimenting. This is not your usual boring science experiment book. It's one of those books that will entice your curiosity about science and also help you get more familiar with your surroundings in general. The book is divided in tree parts. Exploring yourself, (eyes, ears, nose) exploring interesting places (kitchen, beaches, bathroom, and playground) and exploring interesting stuff (language, money, paper, optical illusion, sound, etc).

There are plenty of pictures and illustrations as well. So you will not be bored at all. EXPLORATOPIA: MORE THAN 400 KID-FRIENDLY EXPERIMENTS AND EXPLORATION FOR CURIOUS MINDS by PAT MURPHY, ELLEN MACAULAY AND THE STAFF OF THE EXPLORATORUIM.

For grades third and up!
Posted by Arpine No comments:

ALONE ON A DESERTED ISLAND

Her tribe has had to move away from their island home to a new one across the sea. Karana who was busy getting things ready for the journey boarded the boat but soon realized that her brother Ramo has been left behind. She begged the captain to wait for him but when the boat had to leave to miss an approaching storm, Karana jumped off the ship and swam ashore to join him. Thus begins her 18 year long stay on the island and the story of what she does to survive on this deserted island.

Based on a true story of a woman who had been marooned on San Nicolas Island off the coast of California, The Island of the Blue Dolphins by Scott O'Dell won the Newbery Award for excellence in children's literature in 1961. He also wrote a sequel, Zia.

For grades 4 and older. This title was a Snacktime Reader's selection for May, 2008.

CAN YOU SOLVE THE MYSTERY?

Solve these mysteries in Lakewood Hills along with sixth graders Hawkeye Collins and Amy Adams. Hawkeye has such a keen eye, that he often help the police with their cases, but more often he just helps people all around town. Like the Encyclopedia Brown series, readers are asked to find the clues, but here readers are given a sketch to look at as well.

If you love to solve mysteries then put your brain in gear and read this collection of mysteries in The Case of the Chocolate Snatcher by M. Masters.
For readers in 4th grade and older.
Posted by Cecile No comments: 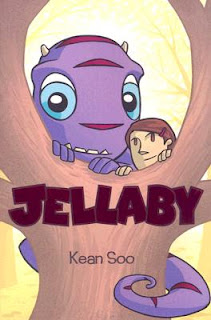 Awakened by a mysterious dream, Portia discovers what she presumes is a lost purple dragon like creature in the woods behind her home. Hiding her new secret companion becomes very hard since Jellaby keeps following her wherever she goes. After seeing a photograph of a door, Portia decides that must be where Jellaby came from, and sets off on a journey to the city to take him home.


An unusual graphic adventure for readers in 4th grade and older.
Jellaby by Kean Soo.
Posted by Cecile No comments: 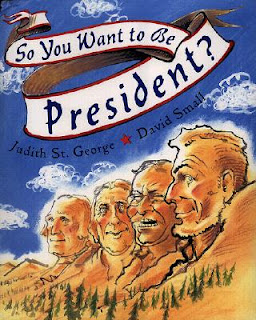 The history of the presidents has never been so fascinating as it is in SO YOU WANT TO BE PRESIDENT by Judith St. George. Not only will you learn which past presidents had pets or facial hair, you will read about Andrew Jackson, who worked as a tailor or Ronald Reagan, the movie star, before they became president. It also talks about the perks of being president, just in case you plan on being president some day. From good to bad, you'll learn all about the presidential history of the United States. The illustrations are hilarious and do more than highlight the stories. This is definitely a book to inspire readers to look further into different presidents and their interesting lives. For 2nd grade and up.
Posted by Lyda No comments: 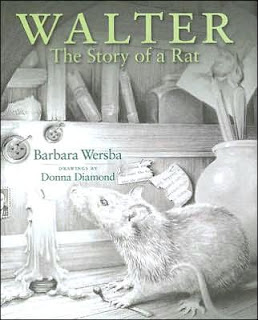 Why is it always the mice that get all the attention and not the rats? This is one of the questions that the very curious and intelligent Walter the Rat wonders about as he lives his days in an author's house full of books.
Hence develops the friendship between the rat and the author in this very unique and original story. Walter and Miss Pomeroy begin to correspond through letters and the more they write to each other the more closer they become. WALTER: THE STORY OF A RAT by BARBARA WERSBA and the illustrations by DONNA DIAMOND is one not to be missed.

For grades third and up.

BEAUTY IN WORD AND VISION 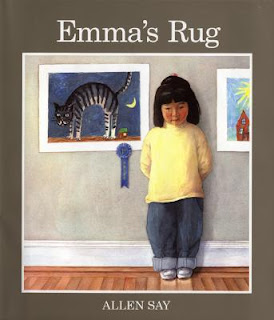 EMMA'S RUG by Allen Say is a cute story about how a young girl discovers art. Everyone is impressed with her young age and ability to paint and draw with amazing talent. Emma swears she just “copies” the pictures she paints, but no one believes her. Emma finds all her ideas in a rug she was given at birth. One day her mother washes the rug and Emma feels her artistic days are over. Only then does she learn she can see the same images in other things. I like this book because it impresses upon kids that art can be found anywhere. Great for Kindergarten - 3rd grades.

Posted by Lyda No comments: