If you're feeling the need for some fresh zombie reads this Halloween season but don't want to be scared out of your mind, try a few of these titles:

Enter the Zombie is new in the Nathan Abercrombie, Accidental Zombie series where Nathan's secret status as a zombie is in danger.

In Dinkin Dings and the Frightening Things Dinkin is afraid of everything but ghosts and zombies.

In the latest title in the Pals in Peril series, Zombie Mommy, Lilly's mom is possessed by a zombie that wants to take over the world.


Remember, don't read at night and keep the lights on while you sleep otherwise creepy things might visit you this Hallow's Eve.

For readers in 4th and up.


Posted by Cecile No comments:

When Ms. Lopez announced to her class that they were going to hatch eggs as a science project, Daniel was very excited.  Not only were they going to know how to hatch eggs but after the project, a raffle was going to be drawn and the lucky students, with two dollars and a parent permission note would be able to take one home.  Their city allowed them to keep hens but NO ROOSTERS.  At the end of the project, the students who had enthusiastically signed up for a chick, for one reason or another were no longer available to care for a chick, except for Daniel.  Who instead of one chick, ended up adopting all the others.  Five total!  When Daniel took the chicks home and his siblings each named one, Primrose, Twinkie, T-Rex, Daffodil and Peeper.  They all worked as a family to take care of the chicks and keep them away from trouble.  When Daniel finds out his chicken, Peeper is actually a rooster; he and his siblings create a secret chicken society to help protect Peeper from people finding out that he is a rooster and not a hen.  How will the secret society try to keep such a secret from their parents and neighbors?

The Secret Chicken Society by Judy Cox is a cute modern story of a family trying to live an urban farm lifestyle.  Not only does Daniel's family raise chickens for eggs but they also plant their own fruits, vegetables and flowers.  This is a great story for grades 1-3.

Posted by Kristine No comments:

Come to the library and pick up a copy of Flipped.  Read it and join us Thursday, November 15, at 7p.m., at the Central Library to hear author Wendelin Van Draanen talk about her award winning book.  If you haven't read Flipped, maybe you've read one of her other series: Shredderman,  Sammy Keyes or Gecko & Sticky.

Running Shoes is her latest book about a high school runner who loses her legs and has to readjust to life and make some new dreams.

In a world where every action is captured and posted on YouTube, Aidan's video went viral and he is declared the Clarinet Hero! There was no escaping his most embarrassing moment where he tackles the governor of Minnessota/ presidential candidate, being taken down by Secret Service and sucking it with his clarinet solo.  But it's not all bad because  The Fresh Idea campaign wants to jump on this instant celebrity status and take him on tour with them and help them win over the Midwest vote with his honesty and small town ideas.

How Not to Run For President by Catherine Clark is a fast and funny read for 6th-8th graders just right for the current political climate.

The number of books and ways to parent a child in America are as endless as the combinations of individuality and uniqueness of people and families in America.  Adding to this list of parenting advice is Pamela Druckerman's book Bringing Up Bebe:  One American Mother Discovers the Wisdom of French Parenting.  Bringing Up Bebe is a well-researched, amusing view at French parenting from an American perspective.  Druckerman notes all of the typically American experiences she has as she raises her first child - She feels as if her life is devoted to this sole being, she is getting no sleep, and cannot have a decent meal in a restaurant with her child in tow.  She notices that French parents don't seem to have this problem.  They enjoy adult conversations, their babies sleep through the night around 3-4 months old, and their children calmly enjoy a multi-course meal in public (surprisingly eating the same things as their parents).  Pamela Druckerman is astounded and a bit jealous.  How do French parents do this?

Through a series of observations, interviews, and research of France's parenting experts, day-care staff, and French parents, Druckerman discovers and practices the art and wisdom of French Parenting.  From "doing their nights" to teaching children autonomy at an early age and acting courteously to adults and one another, Druckerman explores the benefits of government subsidized childcare and a parenting style which most of Parisian society seems to agree on in a humorous and honest way.
Posted by Lessa No comments:

A book review by Mr. B. from the Grandview Branch:

Because ghost stories often involve storms, blood, creaky houses with new residents, dreams, and dysfunctional families, it’s really all in the telling. E. E. Richardson tells it intensely and well in The Intruders. The recently cobbled together Wilder family moves into a deserted two-story fixer-upper in the country. Adolescing Cassie and her slightly younger brother Joel resent new step-brothers Tim (a little younger than Joel) and adolescing Damon (a year older than Cassie). Each of the younger step-brothers has the same recurring bloody nightmares, and hears the same whispered prayer, “If I should die before I wake,” which lead to the expected discovery of the ghosts, a long-ago bloody crime, and the unexpected bonding of the children.

Older readers may catch on to the horrors hiding in the house before younger readers, but all will be caught up in the gory details as the children confront the ghosts in a séance that nearly destroys the house before releasing the  trapped spirits. Beware the Richardson touch: you’ll be checking under the bed for ghosts even if you read this one in the mid-day Sun.
Tags:

Antonia is excited to be a peer counselor. But when she's paired up with Jazz, she's not so sure it's going to be a very good match. How can Antonia, a "nerdy" over-achiever, have anything that she can relate to with this drugged-out punk-rock girl? As it turns out, Antonia and Jazz have more in common than one would expect, and it turns out they both end up helping each other through some pretty tough situations. The content in DEFINE NORMAL by Julie Anne Peters is more appropriate for middle school, grades 6-8.

SEPTEMBER 2012
Posted by Lyda No comments:

When Eleanor finds out her babysitter Bibi has to leave to care for her father, she is devastated.  Bibi has been there her whole life and she cannot image her life without Bibi.  Once Bibi is gone, Eleanor does not want to do anything because everything reminds her of Bibi and that makes her feel very sad.  Eleanor has to overcome the challenges of change.  Not only does she have to prepare herself for a new school year but also her new babysitter, Natalie.

Like Pickle Juice On a Cookie by Julie Sternberg , narrated by Eleanor and written short chapters of free verse, with simple illustrations.  Eleanor demonstrates all the steps a child goes through in processing change.  From accepting, that Bibi has gone to trying to move forward with her new babysitter Natalie, Eleanor still manages to stay connected with Bibi through writing letters.

This is a great story for children experiencing change.  For grades 2nd through 4th
Posted by Kristine No comments:

T.J has always taken care of his sister, Angela.  In and out of foster homes, T.J. was the only one who could coax his sister out of her bad moods.  He was the only one who knew why she made origami paper cranes and let them fly whenever she could.  He tried to protect her from the truth about their mother until neither of them could bear the lies anymore.  Now, though, T.J. is waiting in the Emergency Room for his sister to wake up from a bad fall.  They have a new life now, with new parents, and a new house, but their painful past still haunts them.  As T.J. sits waiting for Angela to wake up, he remembers all of the things - good and bad - that got them to this point and will shape their future - if she ever wakes up.

Waiting to Forget by Sheila Kelly Welch is a heart-breaking story of a young boy coming to terms with his past and looking toward a brighter future.  This book would be great for middle school fans of A Child Called It by Dave Pelzer.
Posted by Lessa No comments: 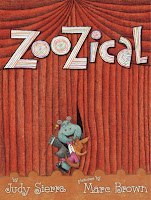 It's winter time and families are staying in their homes and the usual field trips are no longer taking place at the local zoo.  The animals are getting rusty and restless, no one to entertain and no one to take pictures with…”Owls did not give a hoot, pandas quit being cute.”  And so begins the ever fun production of an animal show at the zoo, put together by none other than the animals themselves, hence zoozical…


The illustrations are deep in colors with vibrant and colorful characters that dance, sing and entertain one another until summer arrives.  One of the things that you will learn from this beautifully crafted book is that a person should never feel bored, because no matter what, we can always find ways to entertain us, we just need to look  around us for a little bit of inspiration… Pre-k to 1st grades.

Travis is new to the middle school, new to the area and not happy at all.  When he meets outspoken, Velveeta, a classmate, things begin to look up until he has to read out loud in class.  He feels like a Bluefish all over again.

Bluefish by Pat Schmatz is a hopeful story of new friendships and hidden secrets.  A realistic look at how middle schoolers deal with death, alcoholism, parents, neglect, bullying, and school.  For mature readers in 6 grade and up.
Posted by Cecile No comments:

DADS JUST WANT TO HAVE FUN! 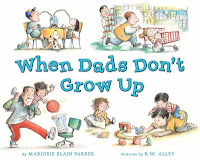 When fathers finish a long day at work they do what’s close to their heart—Play!!

When Dads Don’t Grow Up by Marjorie Blain Parker for babies, toddlers and their dads.


Posted by Vivian No comments: