PINKALICIOUS AND THE SICK DAY

Pinkalicous is honored to be the principal of the day for her perfect attendance. With much excitement, she practices her role as the principal all day long. When she wakes up on the big day with a fever she must stay home. Although she enjoys being taken care of by her mother, drinking a pink tea called elderberry tea, she was sad to learn she had to miss the big day.

Read and find out whether Pinkalicuous will get a second chance to be the principal for the day.  Pinkalicous and the Sick Day by Victoria Kann is part of an early reader series. This is a great book for children who are learning how to sound out words and read simple sentences.

For ages 4-7.
Posted by Unknown No comments: 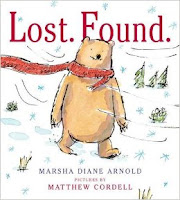 A warm red scarf lies at the center of this clever and deceptively simple winter picture book. In Lost. Found. by Marsha Diane Arnold and illustrated by Matthew Cordell, the two titular words are repeated over and over again as the story progresses, and readers must pay close attention to the details in Cordell's charming pen-and-ink-with-watercolor art, where the true story unfolds. When bear loses his cozy red scarf in the cold winter breeze, it finds and loses several other woodland animal successors, each time being reinvented to serve many a varied purpose--hat! rope swing! trampoline!--along the way. But trouble ensues when all the animals try to claim the scarf for their own and it becomes unraveled. Can they possibly put it back together and discover a way for all the animals to use it together?

This delightfully inventive picture book is wonderful to share with preschoolers through first graders in a group, but even more so in a one-on-one setting, where they will have the chance to really pore over all the finer details of this lovely story. Either way it's the perfect find.

Posted by Meghan No comments:

While sitting in his classroom, Charlie wonders where his parents will take him and his younger brother Max on vacation.  After all, how can they beat canoeing with reptiles in Okefenokee or eating exotic insects in Mexico?  When he arrives home and settles in for dinner, the grand announcement is made.  The vacation will be unlike any other!  Thanks to Charlie's ingenuity, he and his brother, Max, learn that adventures during vacation can really happen at anytime and just about anywhere!

Marie-Louise Gay's book, Summer in the City is a surprisingly fun read with many adventures that really don't cost much.

Posted by Vivian No comments:

A GIRL AND HER UNICORN

What would you do with one magical wish?
When Phoebe unexpectedly frees a vain unicorn entrapped by the beauty of her own reflection, the bright-eyed four grader is granted a single wish. After addressing the irony of having her initial requests for “infinity more wishes”, “infinity dollars,” or “superpowers” rejected as being “unrealistic” by a magical unicorn, Phoebe ultimately makes an impetuous wish that secures the magical unicorn as her best friend
Despite her narcissistic tendencies, Marigold Heavenly Nostrils is clearly fond of her new obligatory human best friend. And Phoebe, though young, is nobody’s fool. Together the two share all the sort of adventures expected of a young girl and her imaginary friend (including sleepovers and magical hair braiding), with the added benefit of having other people acknowledge the magical friend’s existence.
Told through a series of witty comic strips, Phoebe and Her Unicorn is sure to appeal to fans of classic comic strips such as Peanuts, Calvin and Hobbes, and Garfield, as well as contemporary comic stories like Babymouse. With casual references to video blogging, popular cat video trends, texting, and smartphone use, Dana Simpson has created a charming modern day heroine for a new generation.
Grades 3+
Posted by Sherry No comments:

THE MAGNIFICENT LIZZIE BROWN AND THE DEVIL'S HOUND

Lizzie Brown and the Penny Gaff Gang’s latest adventure takes place in Kensal Green, England.  After the traveling circus halts in rural England, it isn't long before the magnificent Lizzie Brown finds herself at the graves of the local cemetery.

When one of the Sullivan twins get hurt during practice they meet Dr. Gladwell’s elderly housekeeper. Soon, strange activities begin occurring. As the performers practice for their upcoming shows, Lizzie’s premonitions get stronger.  Lizzie’s curiosity compels her to sneak around the cemetery to catch the grave-robbers and the devil’s hound.

Don’t be left out! Read The Magnificent Lizzie Brown and the Devil’s Hound by Vicki Lockwood and find out who’s behind the sinister robberies. Will Lizzie’s premonitions help save her life this time?

Ages 10-12
Posted by Unknown No comments:

A JACK IN THE BEANSTALK FRACTURED FAIRY 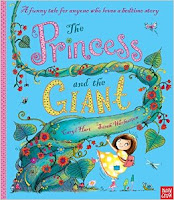 Sophie and her family live in a quiet town.  They work hard, enjoy each other's company, love to read, and share stories.  When night comes, their town is awoken by the  STOMP! STAMP! SHAKE! of the Giant who lives at the top of the beanstalk.The people are frightened by the loud, disruptive noise.  Sophie decides that something must be done, so she climbs to the top of the beanstalk to see what's going on.

When she discovers that Giant has a hard time sleeping, she attempts to share ideas of what people do in order have a peaceful slumber.  Things are difficult at first, but they change when she refers to a good ole' storybook  Sophie ends up learning more about Giant, and caring for him even more.

The Princess and the Giant written by Caryl Hart and illustrated by Sarah Warburton is fairy tale with a twist. It includes roles that are not found in traditional fairy tales.  Princess Sophie is courageous and takes charge.  Princess Sophie is a true heroine in every way!  A wonderful story to enjoy alone, or with a group, and for those who believe in the power of reading.

For PreK- 3rd grade.
Posted by Vivian No comments:

Meet the Iremongers a very large and quirky, to say the least, family who live in a strange pieced together dilapidated mansion in the middle of a vast pile of junk near London, England. When a new Iremonger is born they are given what they call, a birth object that represents them and shapes who they become. One of the narrators, Clod Iremonger, aged 15, has a bath plug for a birth object. Some of the others have items that are even stranger. Clod though has the ability to hear these items speaking and when they start whispering more loudly and start disappearing, he teams up with Lucy, one of the servants, to solve the mystery.

If you enjoyed Lemony Snicket’s A Series of Unfortunate Events, then this new series is a good match for you.   Heap House by Edward Carey is best for readers in grades 6-8.

KEEPING UP WITH AUNT KATE

In the 1860s before Abraham Lincoln became president, an orphan girl, Nell Warne, was dropped off at the doorstep of her only living relative Aunt Kate.  Aunt Kate wanted no part of Nell since leaving their small town after the death of her husband. You see, she blamed Nell's beloved father for that particular tragedy and has never gotten over it.  Nell was determined to change Aunt Kate's mind by being helpful as possible so she won't be sent away to some orphanage to live with total strangers which Aunt Kate kept threatening her with.

So begins the relationship between Nell and Aunt Kate based on necessity and mutual respect as the two hire themselves as undercover female detectives with The Pinkerton Detective Agency to root out crime and deceit.  The story is loosely based on the real life Kate Warne told through the point of view of fictional Nell through narrative and letters with her best friend of the same age whose family escaped slavery by using the Underground Railroad.

Readers will enjoy the adventures of Nell and her no nonsense Aunt Kate in The Detective's Assistant by Kate Hannigan. For readers in 6th- 8th grade who enjoy historical fiction and strong female protagonists in an action packed story.
Posted by Cecile No comments: 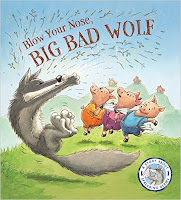 Blow Your Nose, Big Bad Wolf! In this fractured fairy tale written by Steve Smallman and illustrated by Bruno Merz, the classic story of the Three Little Pigs and the Big Bad Wolf is revisited and interwoven with a humorously presented lesson about spreading germs.


Three little pigs each leave home with money, a box of tissues, and mother pig’s gentle admonishment to please use a tissue when sneezing. Following the structure of the original fairy tale, the three little pigs each meet a seller and build homes from straw, stick, brick in turn.


Meanwhile, poor Big Bad is suffering from a nasty cold with a dreadful runny nose. All the (really quite nice) wolf wants when he knocks politely on the newly settled pigs’ doors is  A-A-A-A-TISSUE! * for his nose. But when each little pig in succession rejects his plea, Big Bad’s enormous, snotty, slimy, sneezes inadvertently blow their houses down!


Big Bad ultimately gets A-A-A-A-TISSUE! * that he so desperately needs, while the three little pigs get A-A-A-A-LESSON! * much deserved in sharing and germ control.


For other fun fractured versions of The Three Little Pigs and the Big Bad Wolf, check out The True Story of the 3 Little Pigs allegedly by “A. Wolf” as told to Jon Scieszka and Huff & Puff by Claudia Rueda.

(*Gesundheit!)
Posted by Sherry No comments:

SQUISH, THE SUPER AMOEBA IS HERE! 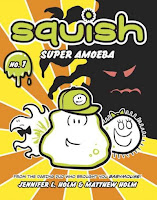 Squish is a science wiz who enjoys eating Twinkies and reading his comic-books.  When his teacher announces that a science exam is coming up, it becomes clear to Squish that not all of the students are prepared to take it.  Squish is likable and would be willing to help others prepare for the exam.  But his generosity is tested when a classmate insists that he should help (or else!).  What would you do if you were an amoeba named Squish?

The is the first adventure of Squish: Super Amoeba by Jennifer and Matthew Holm.
Posted by Vivian No comments: