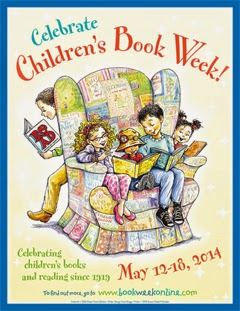 From May 12-18, 2014 visit your library and read your favorite children's books. You can also download an ebook or audiobook onto any device.

Children's Book Week is all about celebrating your favorite books, authors, and illustrators! From comics to mysteries, magic to history...you can find anything between the pages of a book!

DO OR DO NOT. THERE IS NO TRY.

Roan has always wanted to go to the Pilot Academy, just like his dad and his big brother.  After his exams, however, it turns out Roan is not meant to be a pilot but rather a farmer - doomed to spend the rest of his life on Tatooine killing plants.  Because he sure knows he doesn't know how to grow any.  That is, until he gets a letter from the Jedi Academy inviting him to study with the elite Jedi.  Although Roan knows nothing about being a Jedi, other than most of them are recruited as younglings, he figures anything is better than farming and heads off to Coruscant to learn about Wookies, Light Sabers, and "The Force".

Join Roan as he finds his place in the world in Jeffrey Brown's novel for 3rd and 4th graders, Star Wars: Jedi Academy.
Posted by Lessa No comments:

MAKE YOUR OWN MUSIC

A review by Theresa:

With school soon to start, Lewis Blake, the main character in Eric Gansworth’s If I Ever Get Out of Here, decides to do something drastic and take another shot at making friends. As the only kid from the Tuscarora Indian Reservation in the brainiacs track at school, Lewis had spent the past six years not fitting in with the other kids. His solution is to chop off his braid and to hide the fact that he is on the free lunch program. Of course, it’s not that simple, the school bully starts torturing him, his classmates still ignore him and if anything he is on a downward spiral until he meets the new kid. They were an unlikely pair, George a middle class kid from an Air Force family and Lewis the poor kid from the reservation who bonded over a shared love of the Beatle’s music.

The author paints a very realistic and likable story of two kids who stretched both cultural and economic boundaries to become friends.

For grades 6-8.
Posted by Cecile No comments:

LAST WEEK OF PROGRAMS UNTIL SUMMER

JOIN US FOR THE LAST FEW DAYS OF LIBRARY PROGRAMS.  WE'LL BE  GEARING UP FOR SUMMER DURING THE MONTH OF MAY.

THIS MIGHT BE A GOOD TIME TO CHECK OUT THE NEWLY RENOVATED BRAND  LIBRARY AND PARK.
Posted by Cecile No comments:

YOUR NEW SUPERHERO IS A GIRL

The Adventures of Jo Schmo by Greg Trine is the latest series by the author of the Melvin Beederman series.

In Dinos Are Forever, Jo Schmo is the latest caped crusader in a family of caped crusaders living in San Francsico.  Along with her sidekick dog, whose weapon is creating a puddle of slobber, Jo tackles villains of all sorts after receiving a red cape in the mail from her newly retired uncle.

After some training from her grandfather, 4th grader, Jo goes after an evil scientist who tries to resurrect dinosaurs in order to rob banks.  Greg Trine gives us another fun action-packed series with a cast of outrageous characters, but in a believable setting.

World War II home front and magical realism seem like an unlikely pairing, but they work together beautifully in Beholding Bee by Kimberly Newton Fusco.

While World War II is waging overseas, eleven-year-old Bee is fighting a war of her own. Orphaned at a young age, Bee works at the hot dog stand of a traveling carnival. She lives in the back of a hauling truck with Pauline, a young woman who works at the carnival and is the only person looking out for Bee. But, what makes Bee stand out is the “diamond” on her cheek. Born with a large birthmark covering one side of her face, Bee tries her best to be happy despite the cruel stares and taunts she endures on a daily basis. But, at least she has Pauline, who Bee knows will always protect her from the world. There is also the strange, yet comforting presence of the lady in the orange flappy hat, who it seems only Bee can see and who only shows up on days that have been particularly difficult.

When Pauline is sent to work for another carnival, Bee is left truly alone and must face the harsh realities of the world.  Accompanied by her dog, Peabody, and the baby pig she smuggles out of the carnival, Bee digs deep within herself to summon strength and courage she didn’t know she possessed. Her journey of self-discovery and renewal is inspiring as Bee carves out a new life for herself and learns that she is not the only one who has faced hardship in their life.

Beholding Bee is an unusual and unexpected story. The cover art looks like a contemporary novel, but after a few chapters it’s clear that this is historical fiction that reads like a fairy tale. The stark realities of this country during the 1940s are apparent; polio, rationing, families broken apart by the war, and the treatment of children with special needs are all woven into the story. But, like any good fairy tale, there are bright points and moments of whimsy. Throughout it all, the character of Bee sparkles as she learns who she is and what she is capable of.

Recommended for 4th grade and up.
Posted by Erin No comments:

WHERE'S WALDO AT THE LIBRARY? 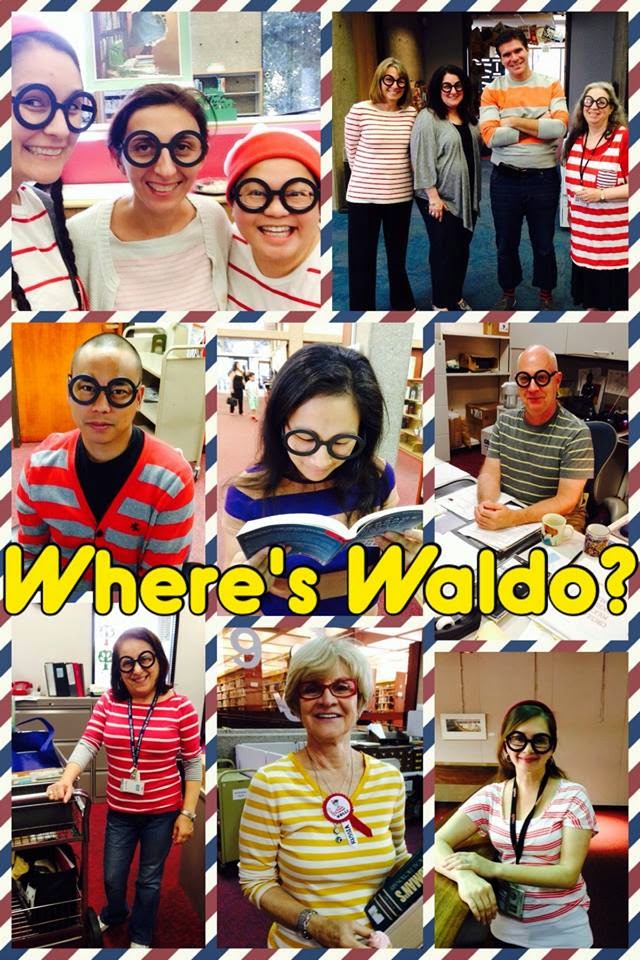 WALDO IS EVERYWHERE!   YOU STILL HAVE TIME TO SEARCH FOR WALDO BEFORE HE TRAVELS TO ANOTHER PLACE.

WOOF, IS AT MONTROSE! 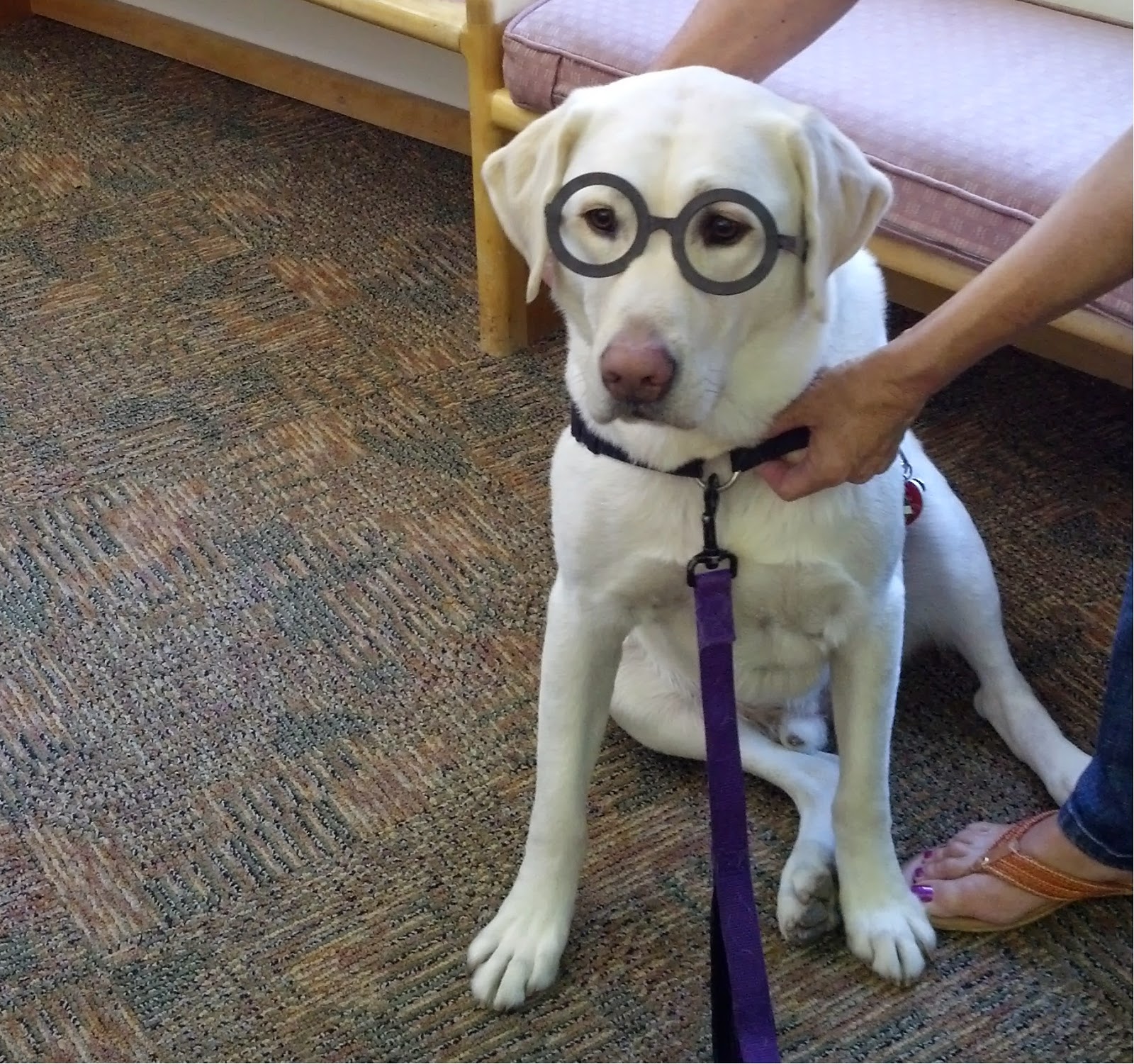 No, it's really McEnroe, the Barks and Books volunteer reader joining in the Waldo fun.  Be sure to drop into Montrose Branch for their Waldo Scavenger hunt this week, too.

Here's a review by 6th grader Grace of the Montrose Branch:

Artemis Fowl by Eoin Colfer is a book about magic, fairies, and deranged criminal masterminds. Most of the time when you pick up a book and read the word fairies or magic, you would set the book back down. When you read that word, you instantly picture tiny little creatures with wings and flower dresses. Not Eoin Colfer's version. He brought together both fairies and criminal masterminds to make a whole different kind of book. In this book these "fairies" are not wand-carrying Tinkerbells,  but highly advanced creatures who can do magic and are extremely dangerous. This criminal mastermind and his bodyguard set off to find the "People" and attempt to steal their gold, which involves a dangerous plan, luck, and a certain female LEPrecon captain.

Once you get a hold of this book and start reading you can't put it down. Eoin Colfer has concocted a book with a pinch of humor, a dash of magic, a sprinkle of adventure, and a whole lot of fun. So keep calm and read on!

For readers in 4th-8th grade.

Posted by Erin No comments:

CAN YOU FIND WALDO? 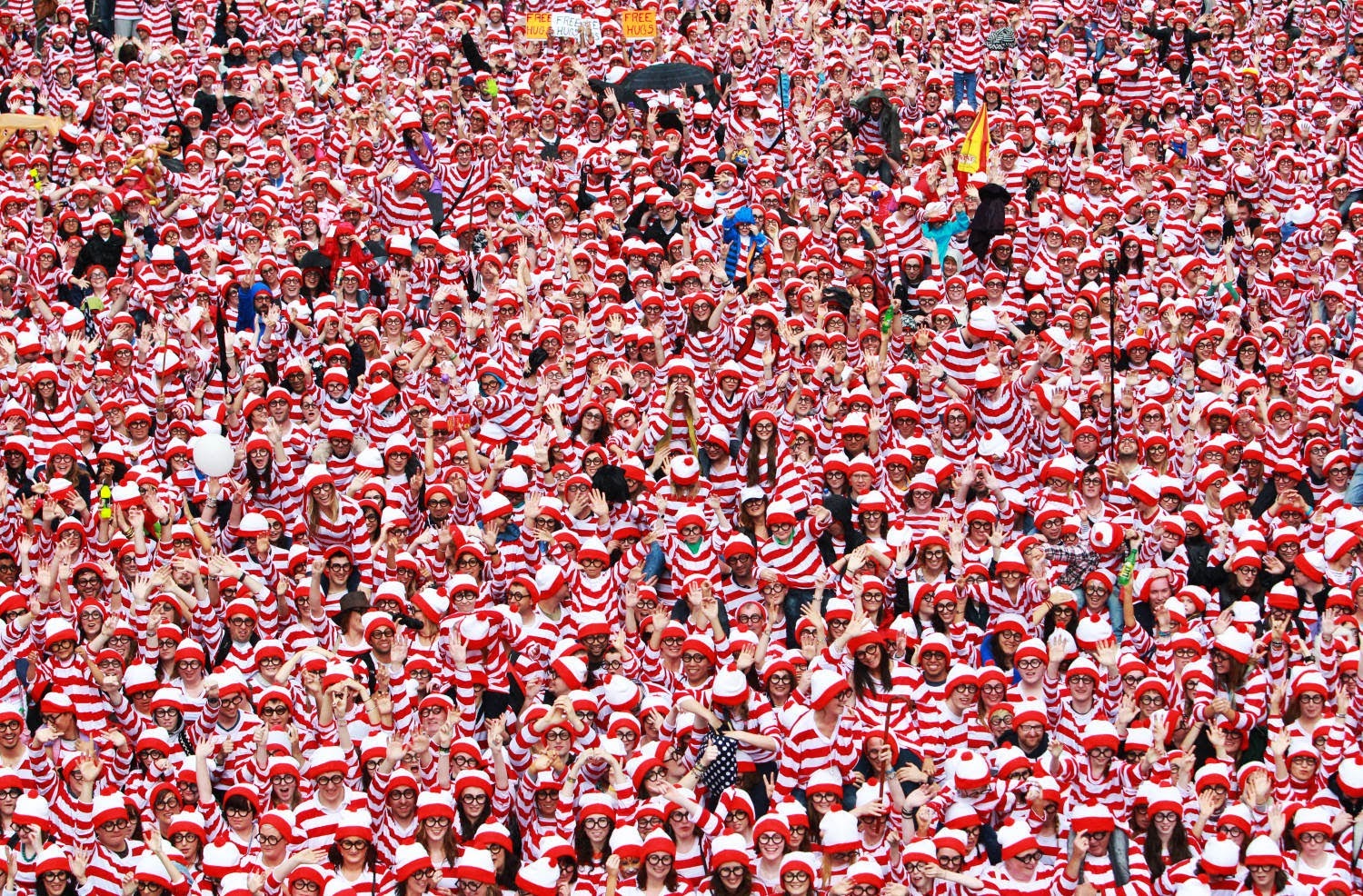 Tomorrow, come to the Central Library and find the Waldos.  Find those staff members with the special Waldo pins.  Pick up your hunt sheet in the Children's Room and start your search. 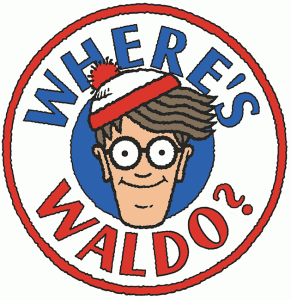 IT'S TIME TO FIND WALDO AT THE LIBRARY.  April 13-19 is National Library Week.  Bring in your overdue books and the fines will be waived. Then hang out with us and search for Waldo, our striped shirt world traveler.   Each library site will have their own Waldo activity.
Posted by Cecile No comments:

SPARKS FLY WITH THIS EARLY READER!

On one fine day, a very small dragon was born.  His parents look him over and are proud of his unique features- a pointy tail and incredible sparks coming out of his big snout! Spark, as he's called by his parents, has a difficult time controlling his fiery breath so they refer to a book that could help solve the problem.  After being taught three lessons, the only thing that Spark really needed was time to develop his own skills.

A gentle and wonderful tale by Kallie George for beginning readers.
Posted by Vivian No comments: 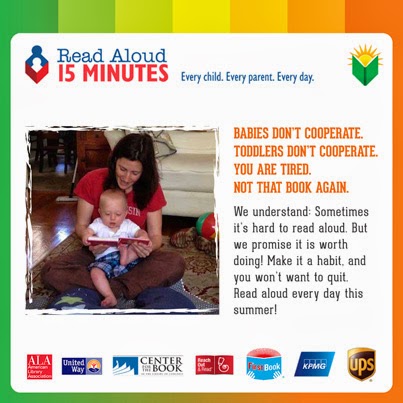 FEWER THAN HALF OF CHILDREN IN THE UNITED STATES ARE READ TO DAILY.

George Calder, a ten year boy travelling with his Aunt Daisy and younger sister Phoebe, is captivated by the Titanic's size and grandeur. George gets an opportunity to meet the ship's designer and its Captain and can't help but explore every inch of the grand ship on his own.  He soon learns from a fellow passenger that a treasure is kept within the baggage compartment and decides to venture off down below the deck. George's excitement soon turns to fear when he encounters a robber who wants to cause him great harm but an unexpected jolt occurs and an object injures the robber.  As George runs back to his quarters for safety he hears that the Titanic had hit an iceberg.  Will George and his loved ones survive?

Lauren Tarshis does a wonderful job of blending the facts of one of the greatest events in maritime history with the story of a boy filled with hope and courage.  The facts presented at the end of I Survived: The Sinking of the Titanic, 1913,  will also captivate readers.

For 8 years and older.
Posted by Vivian No comments:

THE NEXT LAST DRAGONSLAYER

In case you were fascinated-and a little horrified-by the creature that is "one tenth Labrador, six-tenths velociraptor and three-tenths kitchen food blender," from the Last Dragonslayer, you can find out more in the second book, The Song of the Quarkbeast. With the Great Zambini still missing, Jennifer Strange continues to be the acting manager of Kazam Mystical Arts Management, and it is not the easiest of jobs. With the rise of Big Magic, Jennifer, Tiger Prawns, and the accompanying cast of strange but generally well-meaning magicians are the only ones who can prevent King Snodd and iMagic from using magic for personal gain, rather than the common good. The troubles start when a mysterious client recruits Kazam's talents to find a ring that does not want to be found, and only escalate when King Snodd appoints Blix from iMagic to Court Sorcerer, requiring Kazam to obey all of iMagic's wishes. Will Jennifer and Kazam be able to resist Blix and King Snodd against all odds? And most importantly, why is there a mysterious Quarkbeast roaming in the streets of Hereford?


The Song of the Quarkbeast  by Jasper FForde is as lough-out-loud witty as its prequel. In fact, it is possible that it might be even better. If you like a good deal of laughs with your fantasy and science fiction, you might have just met your favorite new series.

For readers in 4th-8th.
Posted by Anush No comments: