FOLD ME A POEM! 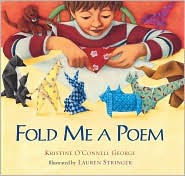 The colorful pictures in this book are so beautiful that even if the reader doesn't want to read the poems which consist of few lines that are clever ans smart, they will just enjoy the pictures. The protagonist in the story is a boy, which adds so much more to the story since poems are usually not as popular with boys. Throughout the pages of the book, he makes different origami animals. The pages are really amazing in that they illustrate the essence of what the poet is expressing and these illustrations are in origami format. It's an engaging book that not only is pleasant to read, but you can also make the origami's that are in the book as well. FOLD ME A POEM by KRISTINE O'CONNELL GEORGE and illustrations by LAUREN STRINGER. 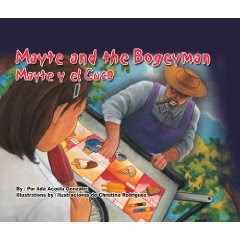 Mayte and Pepito are convinced that Don Aparicio, the grumpy ice cream seller, is really the bogeyman. Don Aparicio constantly complaints about badly behaved children who need to be taught a lesson. Mayte comes to believe that he is the Bogeyman (el Cuco) who kidnaps bad children and eats them or sells them at the market.
One day, Mayte and her best friend Pepito spy Don Aparicio carrying a bag with something strange inside. They follow him to the marketplace in hopes to rescuing the victim.
Beautifully illustrated in English and Spanish.
For readers Grades 1-2, Ages 6-7. Written by Ada Gonzalez, illustrated by Christina Rodriguez.
Posted by Ines No comments:

Kira Kira is a Newbery Medal winning book that is told by the point of view of a Japanese-American girl who has emigrated to the United States with her family. She is having hard time adapting to her new environment and compare to her sister, Kira-Kira, is struggling in her school work. Things turn to worse when her sister gets sick and it becomes obvious that her living days are numbered. This affects her in ways that become very hard not only on her but also on the whole family. In addition, her father is also having hard time making a living. She tells her self that no matter what has happened in her life, she still needs to view the world as a glittering, shiny place, which the name Kira-Kira means. This gives her strength and courage. Kira-Kira is by Cynthia Kadohata and will be one of the most memorable books that you will read.

Grades 5th and up.

This is a thoughtful story about two young Jewish sisters from Vienna, twelve-year old Stephie and her eight-year old sister, Nellie.
During WWII, Stephie and Nellie were separated from their parents who sent them away to an island near Sweden to escape from the Nazis during the war. The sisters expect to stay in there for about 6 months until they can reunite again with their parents in America. Unfortunately, they were separated upon arrival to the island. Nellie stays with a foster family that really cares for her. She has many friends and becomes adapted to the Swedish culture. Stephie on the other hand, has a miserable life. Her foster mother is a cold woman, she has no friends and is constantly bullied at school. She is very jealous of her younger sister. During this journey of being distant from her family, she wonders to herself if she will ever see her parents again. The sadness of familiar separation and the barbarity of Hitler is well expressed telling the story of Jewish children during World War II in Europe.
Posted by Ines No comments: 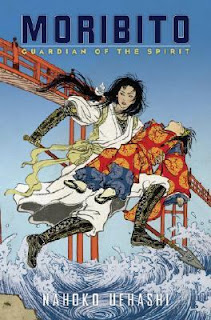 Moribito: Guardian of the Spirit by Nahoko Uehashi is an action packed Japanese mythological fantasy novel. Someone is trying to asassinate Prince Chagum, the second prince in line to the throne. While passing by a bridge, Balsa, a female bodyguard in a world of only male bodyguards rescues him from drowning. Surrounded by fear and suspicions Prince Chagum's mother begs Balsa to keep her son safe. As Balsa tries to figure out who is trying to kill the prince, she must battle dangerous soldiers from the royal court and old enemies from the spirit world.

A suspenseful story with lots of fighting, and blood. Great for readers 6th and up.
Posted by Cecile No comments:

TOO MANY TOYS (Demasiados Juguetes) NOT READ 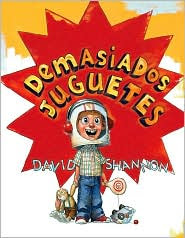 Spencer has too many toys. The house has become hazardous. His father trips over them, his Mom falls over them. Something has to be done! He needs to give some of the toys away but Spencer tries to persuade his mom to keep them all because every single toy is his favorite.
Spanish edition written by David Shannon, illus. by author. Ages 4-8
Posted by Ines No comments:

NOT SUCH A LITTLE SECRET 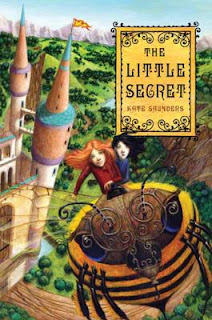 Life as a princess isn't always what it's cracked up to be, particularly when the Queen is mean and horrible. But when you are tricked into becoming a princess, it is even worse. Jane is whisked away to a strange castle by an odd new girl at school. Jane's summer vacation couldn't be a stranger adventure. She flies on giant bees, eats slugs and helps save the land of Staffa and her people. Though the book is quite quirky, THE LITTLE SECRET by Kate Saunders will appeal to fans of unrealistic/fantasy fiction. For grades 4 and up.
Posted by Lyda No comments:

CHAVELA AND THE MAGIC BUBBLE

On Saturdays, Chavela and her grandmother would split a piece of gum and go shopping on Market Street. Chavela's abuelita would tell her stories about the quiet town of Playa del Carmen, Mexico, where she grew up. Chavela chews a magic piece of chicle and flies to the Yucatan jungles. She meets the chicleros who harvest the sweet fruit from sapodilla trees to make chewing gum. Chavela goes on a wonderful adventure. Fun and colorful book.
Kindergarten Ages 5-6. Written by Monica Brown, illustrated by Magaly Morales.
Posted by Ines No comments:

When Miguelito, a Mexican-American boy looses his tooth and hides it under his pillow waiting for a present in exchange. he has no idea that he is setting off a big conflict between the Tooth Fairy and her Spanish-speaking counterpart, el Raton Perez, the charming and adventurous mouse who also collects children's teeth in Spain and Latin America. The Tooth Fairy feels she is in a competition, so she claims Miguelito's tooth, "Here's my tooth!" she says, and the mouse replies "!Aqui esta mi diente!". Fortunately the conflict is resolved when both collectors learn to work together teaching a lesson about sharing and cooperation. Charming storybook full of humor and imagination. Written by Rene Colato Lainez, illustrated by Tom Lintern. Kindergarten ages 5-6.
Posted by Ines No comments: