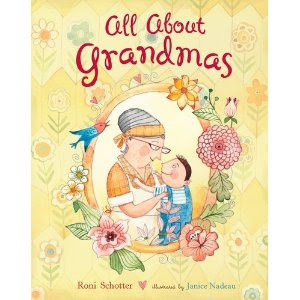 Today, there's no such thing as a typical grandma. They come in different shapes. They do different jobs and have different hobbies. They even go by different names! But one thing grandmas have in common is their unconditional love, kindness, patience and wisdom they have to share. Its presence in the lives of their grandchildren is a valuable contribution. From the nagging Grandmas to the cooking Grandmas this book covers them all. It’s a great book to show the little ones that there is a world full of Grandmas and each one is special. Perfect gift for Mother’s Day. Includes a list of names for grandmothers in different language. Pictures are bright and colorful and the rhyming is wonderful. Recommended for ages 3-5. Written by Roni Schotter, illustrated by Janice Nadeau.
Posted by Ines No comments:

From Vivian the Children's Librarian at the Casa Verdugo Branch Library:

Box of Shocks by Chris McMahen

Oliver has a life filled with security—he lives with his working mother and father, he has a beautiful and organized home, he takes prepared lunches to school, and he gets to go on annual trips to see his Uncle and Aunt.

On one ordinary day, Oliver discovers a buried box and decides to fill it with items that will give his parents the shock of their lives.  Reckless and dangerous acts of behavior is involved in getting these items and Oliver is consumed with protecting it.  Unfortunately, Oliver’s Box of Shocks is left behind in his old home and he decides to go on with his reckless behavior in order to get it back.  What Oliver soon discovers is that not everyone has the same disposition as he and that the last item placed in his box is the most meaningful. For older readers.
Posted by Theresa, Children's Librarian No comments:

From Mr. B at the Grandview Branch Library:
King of the Mound (My Summer With Satchel Paige)
By Wes Tooke

Twelve year old Nick was “king of the mound” for his team until polio put him in the hospital for a year. Now, with his weak leg in a brace, even his dad – a catcher for historic the semi-pro Bismark Churchills – calls him “a cripple.” The Churchills are an integrated team – one of the last, as integrated semi-pro teams were banned starting with the 1936 season. But, in this summer of 1935, Negro league star Satchel Paige, another “king of the mound,” has been hired in the hope he can take the team to the newly inaugurated semi-pro championships.

If you ask me, a life without a pet is no life at all. But not all pets have the luxury of being a  part of someone's family, a warm place to stay, or a safe place to live. In the town where Billy lives, there are a lot of stray cats, and not everyone in town want them around. When Billy discovers Conga, a hurt starving kitten, he has to keep her a secret because he KNOWS his Dad would take her away. This small kitten leads Billy on a dangerous adventure, but it isn't long before he's teaching the town a thing or two about the importance of love for all creatures. CAT FOUND by Ingrid Lee is a story that will pull in animals lovers and captivate them with it's dangerous and exciting plot twists. Written for simpler reading level, but contains content that might be mature for some. For grades 3-7.
Posted by Lyda No comments:

A new neighborhood, a new school and a new nemesis are just a few things that Ricky V. (“Very Afraid”) has to deal with when his dad gets a new job and the family has to relocate.

Ricky has to think and come up with different ways to fight the evil bullies who are prepared to do everything and anything to make his life miserable...
Instead of turning himself to any kind of a superhero, he decides to transform himself into a Cowboy! Hence the name of the book Cowboy Boy!

Now... Imagine all the tricks and the gimmicks that can be pulled as a cowboy to fight the nemesis… This is a fun and adventurous story that will capture you attention. Additionally, the book is filled with humorous illustrations/cartoons which add a fun twist to the story. COWBOY BOY is written by JAMES PROIMOS. 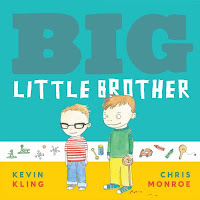 From Vivian the children's librarian at the Casa Verdugo Branch Library:

An older brother gets what he wants.. a younger sibling.  Over time, baby grows bigger and taller and is mistaken to be the older sibling.  An unwelcome idea at first but big brother soon has a change of heart after he’s bullied in school, and his younger brother’s mere presence helps to solve the issue.  A wonderful story to share!

A TRIP TO PARIS 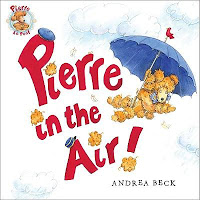 From Vivian the children's librarian at the Casa Verdugo Branch Library:
Pierre in the Air! by Andrea Beck

Pierre dreams of adventure and one soon comes true when he sets off for Paris for a dog show.  When an opportunity arises for his owner to see the Eiffel Tower, Pierre wants to go but is left at the hotel time and time again.  This poodle seeking adventurer will stop at nothing so he can enjoy the architectural wonder of his dreams.
Posted by Theresa, Children's Librarian No comments:

8 Class Pets + 1 Squirrel / Dog= Chaos by Vivian Vande Velde is a funny story about a squirrel named Twitch who gets himself in all kinds of trouble when he tries to run away from an owl and then during his escape lands on a dog that chases him all the way into the school.  Twitch ends up being locked inside a school with an angry dog that is determined to find him.  As Twitch tries to find a place to hide, he meets the school pets along the way.  Will these animals help squirrel hide from the dog chasing him?

Each chapter if from the viewpoint of different classroom pets (hamster, rabbit, rat, fish, parrot, corn snake, geckos and turtle) as well as the squirrel and dog.  Readers will meet the interesting characters that live in the school.

This is a hilarious book that will keep readers attention until the very last page.  Great for reluctant readers!

Best for readers in grades 2 and up.
Posted by Theresa, Children's Librarian No comments:

MERMAIDS AND PONIES AND CARNIVALS! OH MY!

Rosa lives in the ocean with her BFF's Melody, Sula and Jasmine and they cannot wait to do a performance for this year's carnival. Even Rosa's cousin is going to help make it the best dance ever! Wait. They live in the ocean? Yes, because all the girls are MERMAIDS!!! And, as part of their best dance ever, they change a sea horse into a magical water-pony that is sparkly and gorgeous! Trouble is, Coral is better than Rosa, and Rosa gets a little mad, and then something bad happens to the pony! Better read to find out what happens next...ROSA AND THE WATER PONY by Katy Kit is just the beginning of the "Mermaid Mysteries" series. For grades 2-4.
Posted by Lyda No comments:

MY HEART WILL NOT SIT DOWN 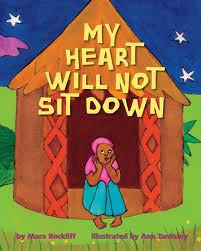 In a village in Cameroon, a teacher tells his class about America his home country. There is something going on called the Great Depression. There are not enough jobs, people are homeless, starving and begging on the streets. When little Kedi learns about it, she can’t get the problem out of her head. The news that children were starving, deeply affects Kedi. Knowing what it means to go hungry, she is determined to help the hungry children overseas. Her village has little money and everyone must work for food and shelter, yet, little Kedi wants to share what she has with the people she has heard about in school. She calls all the people of her village and persuade them to do the same. Based on a true story in 1931 when the city of New York received a gift of $3.77 from the African country of Cameroon to help feed the hungry. Nice story that shows generosity and compassion. Bright and beautiful illustrations. Ages 6-7.Written by Mara Rockliff, illustrated by Ann Tanksley.
Posted by Ines No comments: