Yoshitsune was a young boy when his father’s life was taken ruthlessly during the war. This was the way of life for a samurai warrior during 12th Century Japan.   As in any war there are two sides: the winning side, Taira, and the losing side, Minamoto.  Both samurai clans fought to the end.

Afterwards Kiyomori, a Taira leader, allowed baby Yoshitsune to live with the monks rather than have him killed. Young Yoshitsune did not grow up to look like a warrior from a long line of samaurai, but was a frail, unskilled man who  yearned to escape the monastery in order to live up to the Minamoto legacy and overthrow the Taira clan.

It is not often that a reader will find a non-fiction children’s book that captures one's attention like a novel.  This particular book is captivating when describing the characters and the battles in careful detail. The author, Pamela Turner, does not hold back nor does she sugarcoat scenes; instead, she has shared the story in such a way that leaves the reader completely immersed in history. Turner does a noteworthy job providing pronunciations of names in Japanese as well as offering notes for her sources.

Samurai Rising is highly recommended. Find out what became of young Yoshitsune.

For ages 13 and up.
Posted by Unknown No comments: 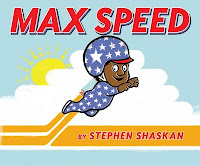 Max just finished cleaning his room and off he zooms on a super adventure: dodging volcanoes, dealing with sharks and super secret underwater caves, and just having a good time. An adorable preschooler, Max is drawn with bright simple illustrations, shown having a good old time imagining himself in fun and exciting fantasy play.

Max Speed by Stephen Shaskan makes for great read aloud fun with your toddlers up through kindergarteners. 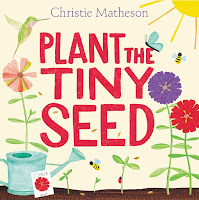 It’s springtime again, and a new picture book by author-illustrator Christie Matheson is blossoming once more.

Following the success of Tap the Magic Tree (a storytime favorite for all ages!) and Touch the Brightest Star, Plant the Tiny Seed presents a simple interactive story of growing zinnias from seed to flower. As in previous books, readers are invited to tap, clap, wiggle, and rub images to progress the story. Nature is a marvel, and this book beckons to young listeners with the promise that magic is everywhere.

For a complete toddler-friendly gardening experience, check out Planting a Rainbow by Lois Ehlert and Dig In! by Cindy Jenson-Elliott. To explore more interactive app-like picture books for a screen-free audience, look for Get Out of My Bath! by Britta Teckentrup, This Book Just Ate My Dog! by Richard Byrne (previously reviewed here), and books by Herve Tullet.

Ages 2+
Posted by Sherry No comments:

NEVER JUDGE A BOOK BY ITS COVER

A book review by Theresa:

One of the things I always tell people browsing the shelves for something to read is to just look at the spines of the books, pull out a title that sounds interesting, look at the cover and if you are still interested, read the inside flap and see if that convinces you. This one fails the first two miserably; spine black, outline of a cloud, author’s name and the word “moo;” cover author’s name, title and a less than appealing drawing of a black and white striped cow. Even I, who really likes this author, had a hard time settling down to read this one.

MISTAKE! If I had never opened up Sharon Creech’s book Moo, I would have missed some of the best characters in all of stories. Meet Reena, her brother Luke and their parents who have decided to abandon city life and move to rural Maine. Meet also their very unusual neighbor Mrs. Falala and her animals, a pig named Paulie, a cat named China, a snake named Edna and a very special cow named Zora. They are the central characters in Reena and Luke’s summer when their parents offer Mrs. Falala, who was very old and rumored to make weird things happen, the services of their children to help out around her small farm.

Less than thrilled the two kids find themselves doing chores way out of their comfort zone—shoveling out a barn, not fun. Slowly there is a change of attitude when they are challenged with Zora, the loud, belligerent cow and lose their initial fear, ultimately becoming very attached to her. Zora expands their world and teaches them that a little kindness works well for both animals and people.

This novel is written partly in prose and partly free verse which helps heighten the emotion and the mood and make this a story and characters that will stay with you for a long time.

FOR DINNER - DIRT OR SMELLY SOCKS

James' father tells him some outrageous tales to get him to eat broccoli, smelly lasagna, slimy eggs, lumpy oatmeal, and repulsive milk ( I'm with you on this one, James).  The story James is told is that if he doesn't eat the smelly lasagna, then the troll chef that made it will have to go back to his awful job at the rat circus.  When James turns down smelly broccoli, his other food choices are sweaty socks, the finest dirt or specially chewed gum. Delishhhh!

The stories keep getting wilder and wilder with an increasing less gullible James. By the end of the story, James knows how it works and just gives in to the delicious eggs sitting in front of him.  Tales For Very Picky Eaters by Josh Schneider is for beginning reader in 1st - 2nd grades who enjoy silly humor.

Abbie Wu is suffering from an extreme case of the middles.

Not only is Abbie a middle child (squarely between her amazingly good at everything older brother Peter and her annoyingly adorable younger sister Clara), she’s now starting middle school, and she’s currently in the middle of an identity crisis!

It seems like her best friends know exactly where their talents lie: Maxine is natural actress, while Logan is a young tech genius. Meanwhile, Abbie has tried plenty, but has yet to find her Thing. So when it comes time to choose the ever-important elective class, Abbie finds herself in dread study hall instead. But it’s once there that Abbie is drawn into a campus-wide underground lunch revolution that may reveal to everyone, including herself, just how much she has to offer.

With an air of dramatic doom and plenty of attractive cartoon illustrations on every page, Frazzled: Everyday Disasters and Impending Doom by Booki Vivat is a great read-alike to middle grade staples like Diary of a Wimpy Kid and Dork Diaries. Perfect for the humorously hyperbolic and melodramatic middle grade reader in your life.

Grades 4-6
Posted by Sherry No comments: