A BEAR IS ON THE LOOSE! 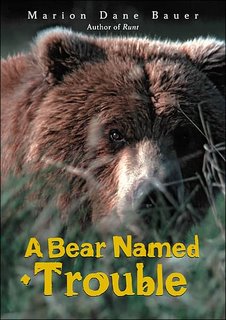 Jonathan loves Mama Goose. In fact, he loves all animals at the Alaskan zoo where his father is the keeper. Nearby in the wild, a young bear is becoming more and more desperate. His mother has turned him away and he must now survive on his own. The poor young bear is getting hungrier and hungrier but can't find any food. And when he finally does, he is attacked by an angry moose. Now hurt and starving, he is moving further and further away from his territory and closer to Jonathan's home. One night, the two "boys" meet and Jonathan is absolutely taken with the bear. Jonathan lures the bear into the zoo with food which brings about disaster. Jonathan witnesses firsthand how much harm a wild animal can cause. Now the bear has been named trouble and the zoo authorities are looking for him. Jonathan is torn. Should he try save to Trouble? Would Trouble hurt him too?
Posted by Theresa, Children's Librarian